All current tablets and MiniPC using a Rockchip RK3188 quad-core CPU are currently limited to 1.6 GHz frequency. The CPU was initially marketed to run at 1.8 GHz, it's not clear if current limitation comes from the hardware on the first processors production batches or if it's a choice by the manufacturer's to limit the speed for better stability and battery life (in case of tablets)
Luckily, RK3188 kernel source release a few days ago opened some tinkering possibilities to modify CPU and memory frequency. Let's have a look at the results. 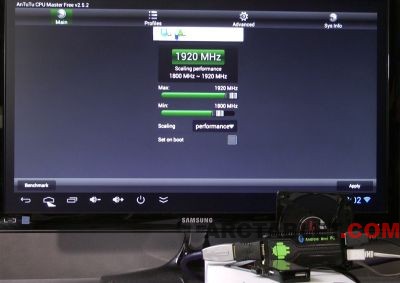 We used a UGOOS UG8007 MiniPC, a rather cheap and reliable quad-core powered RK3188 MiniPC available at €55 / $74 / £47 to test overclocking. As these kind of devices are typically quite limited in term of cooling, we installed a small 80 mm Enermax case fan blowing air on the side of the MiniPC, the device was purely stock, with no special heat sink.

To achieve overclocking, we have built a special firmware using our custom Rikomagic MK802IV Android 4.2.2 firmware (2013/06/03) and sam321 720p 1920 MHz overclocked kernel. Hardware wise, to perform this test we used a stable 2A power adapter to provide clean and sufficient power supply to the device.

We obtained a relatively stable overclocking and encouraging results on an stock device. On the stock kernel running at 1.6 GHz using Interactive governor, Linpack benchmark which measures the system floating point computing power top scored at 145.027 MFLOPS and AnTuTu benchmark gave 15147 points. Using the overclocked kernel at 1.92 GHz with Performance governor, Linpack score topped at 202.724 (that is a ~39% increase) and AnTuTU score bumped to 18916 points, ~25% increase.

We will shortly publish this new custom firmware on…