AndrewDB, Alok Sinha and their developer team are bringing a nice Ubuntu package for RK3066 based devices. This is basically a Pico sized (under 200 megabytes) Ubuntu Qantal 12.10 distribution for pico sized hardware, hence the name, PicUntu.
The first 0.9 RC 2 version has just been released, supporting some Rockchip RK3066 based MiniPCs such as the MK808 and UG802. 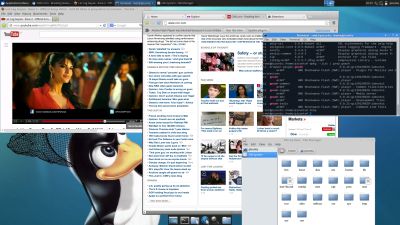 The first big 0.9 release is oriented to support most common RK3066 based MiniPC such as MK808 and UG802 models. On both models, networking works with either the default internal WiFI or thru the use of an external USB Ethernet dongle. Support for other MiniPCs based on the RK3066 architecture such as the iMito MX1 / MX2 is in the works, we may even see PicUntu on some tablets as well in the future

PicUntu system and data files are stored outside the RK3066 device internal storage, you can use a microSD card, an USB external storage such as a Flash drive or hard disk. 4 GB storage space should be enough to store PicUntu and provide enough space for extra packages and a few users files. If you are using a SDCard, we recommend using a fast model (class 6 or better).

PicUntu files are available from Google Code rk3066-linux pages.
Another download site is available on a server actually running PicUntu, check ubuntu.g8.net
We also provide 2 mirrors for the files: mirror 1 (Europe), mirror 2 (US, rest of the world)

: a recovery image to flash on your RK3066 device, this image provides the Linux kernel to boot PicUntu from. Being installed as a recovery image, it can cohabit with an existing kernel that still let you run Android on your device.

: pre-installation script that runs from an existing Linux: it takes care of the rootfs download, network configuration…