Here is an Android 4.2.2 Jelly Bean rooted firmware for the Sumvision Cyclone Voyager 7" that should also work on the PiPO S1 tablet. This custom firmware is based on latest Sumvision update dated 2014/01/16. 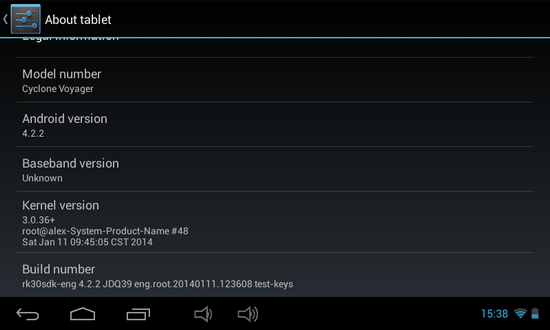 - any update received thru OTA may interfere with our custom firmware, we recommend not to apply any OTA update

This custom firmware hasn't yet been tested, please report any problem.

Hello! i have one question

can be installed on a tablet with similar features, but has a resolution of 1024x768?.

I wouldn't recommend it, there could be many other differences with components than just the display: camera, accelerometer ...

ok, thanks for replying.

I am using this ROM now and it is much faster and smoother compare to the previous version. My Antutu is now 13,600, previous ROM was 11k+.

There's a bug I encountered. When playing videos using Stock Video player then switch the screen from Stretch to zoom-in by tapping the icon at the lower right beside the notification, I got a pop-up saying something like, Unfortunately, SystemUI stopped responding. It keeps popping up and no way to  switch back to Stretch screen  so what I did is re-flash the ROM.

Also, can you  modify the build.prop to make the stock launcher looks like Google Nexus where the Notification is at the top left and Quick Settings is at Top right as well as the Softkeys are in the middle center. The same launcher after applying the Cyclone Patch v1 build.prop for firmware version 20130709 . I've tried contacting AlmoSTacey   through Facebook but still waiting for his response. I do not know what code I take out from his patch to put on the build.prop on this new ROM

Thank you very much.

Works exactly the same as the rooted ROM on here - but fixes the CPU speed issues so runs at the 1.6 rather than 1.4!!

any chance of a rooted version of the new firmware ADMIN?!

Would do it myself but don't have a clue what I am doing!!!