Have I Bricked PIPO M9 Max Beyond Repair?

Last time it worked it had RileyROM 2.5.3 installed. Suddenly it stopped working and was stuck at boot logo. Tried downloading KitKat 4.4.2 Kasty firmware and after process almost complete had "Download firmware fail" message: 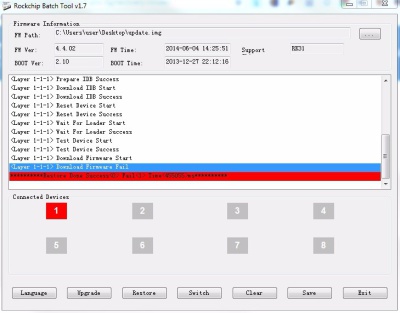 So I decided to try flashing RileyROM 2.6.4 and using ROM Flash Tool v1.37 I have reached the stage with NAND testing. It did not fail but it kept counting memory over and over when it was close to 16384, every time restarting count. I had to disconnect and after reconnecting and restarting flashing process it would no longer reach NAND testing stage. It would now be at lower format stage where same thing would be happening as with NAND but now it's with formatting: 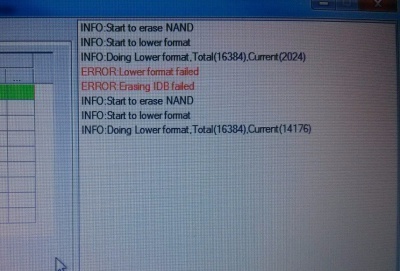 I tried RK Batch Tool v1.7 and reconnected cable. The tablet would now disconnect after every 10 seconds and reconnect back thus interrupting Test Device stage but even if it was at 97%, it would resume from that point. It was never 100% and it started all over: 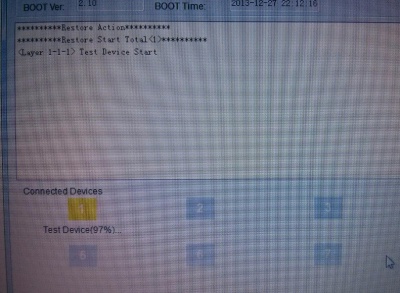 I thought it's the battery since it was worn and I had it run out after 30 minutes after it was full. After connecting to power charger and seeing it was fully charged, I disconnected adapter and connected tablet back to PC with USB cable at which point it was no longer connecting. The green square would only turn on if I held Power button but still tablet would disconnect after 10 seconds or so.

So there you have it. I think I have bricked the device beyond recovery. Is there anything that can be done?

Could be the NAND is defective. Try this: http://crewrktablets.arctablet.com/?wpfb_dl=1631

Tried the tool but tablet disconnects after a short time even if I am holding power button. This does not let procedure to complete I think. After pressing power button again and performing action it resumes from point it stopped. It reaches the end but then it starts scanning again. If I release power button in the middle of scan, I get errors. I tried reading serial number and same thing happens like with erasing IDB: 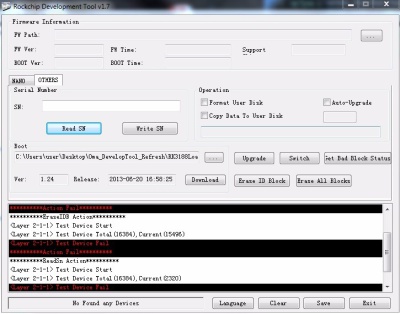 Unfortunately your NAND is gone.

Hi Oma. Thanks for assistance. How did you determine that it's a NAND? There was no any specific error code shown.

This is your flash memory. Typical for these tabs is NAND-type 😉

I don't ever remember throwing away electronics. I never had device that failed and gave away what I was not intending to use to friends. There is nothing that can be done with this tablet, correct? Even if I wanted to replace NAND chip, I would have problem finding it, not to mention the technical know-how to repair.

With that in mind is there anything else I should keep from it before throwing it away? There's adapter with a plug specific to this tablet, USB cable with prolonged Micro plug. Not sure about adapter because I think using it for something else will require modifying with proper plug.

Are tablets required to be disposed of properly by the way since they operate on lithium batteries?

You are right, it doesn't make sense to replace the NAND chip. A tab is clearly special waste.