as described in the Topic Name I'm looking to see if there is such a Cable that would allow to have the tablet connected to the charger but at the same time having some USB Key or Disk drive connected to the tablet. I have a micro-USB to USB-Female connector which allows me to connect my USB key without any problems but the fact that there's only one micro-USB port on the tablet and that it's also the port being used to charge is kinda limiting the possibilities.

I've found such a Y Cable on a chinese site which splits the micro-USB into 2 female ports.. one micro-USB and one USB, normally that would let me use the normal charger on the micro-USB part and then some device on the normal USB.. but it just doesn't work. The tablet won't take the charge if I connect my normal cable thru the Y Cable's micro-USB female port, also I have a regular micro-USB to USB female cable to connect devices but if I add this to the Y Cable the tablet doesn't detect the usb devices but it does if I connect one of those device directly to the Y Cable's normal USB Female port. Basically I can use it as a basic micro-USB to USB but not as a splitter.

I attached a picture of that Y Cable I bought that isn't working.

If anyone successfully used such a Cable I would love to know where you bought it.

Thanx for the help !! 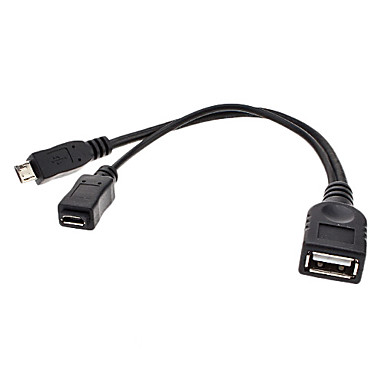 I tried about 3 different brands of these and none of them worked.

they work with other tablets but not my onda v972