Along with my fairly new V813 which is very nice, I also bought at the same time (from Onda-tablet.com) an HDMI cable to use with it.

It turns out that the HDMI cable they supplied was a mini C and not a micro D version which the V813 apppears to have a slot for.

Anyway, rather than sending the cable back to China, I bought one on Ebay which did not work as the cable was damaged. I have now had a replacement which does not appear damaged but also does not work with my TV.

I have tried with the oringinal V2.0 frimware and the Kasty V2.0, just in case but still no joy.

I may try an adapter next and use a working HDMI cable as I cannot verify if this (micro) cable works on anything else. But before I get one (or another cable!),

Does anyone have a working HDMI connection to their TV with the V813?

I thought that I should I be able to watch games videos etc on the TV playing on the tablet. Is this not the case?

any help most appreciated,

pingu123456 said
Does anyone have a working HDMI connection to their TV with the V813?

Yes. But I had to modify the plastic on the end a bit. The HDMI and USB ports are very deep in the case. For USB you have to use the included Onda USB cable or modify the end. For HDMI I had 2 cables that I changed. Basically you just need to cut away some of the plastic to make the cable fit deeper.

This is a modified USB with a non-modified one. 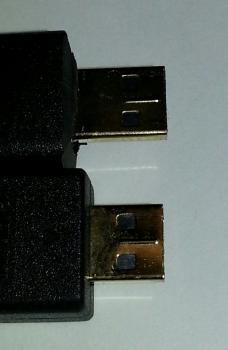 This is two modified HDMI cables. The left is an HDMI to VGA adapter I bought from geekbuying. It uses the 5volts out the port to power an internal digital to analog chip. The adapter does work on newer VGA monitors. On older monitors they complain about the refresh rate. 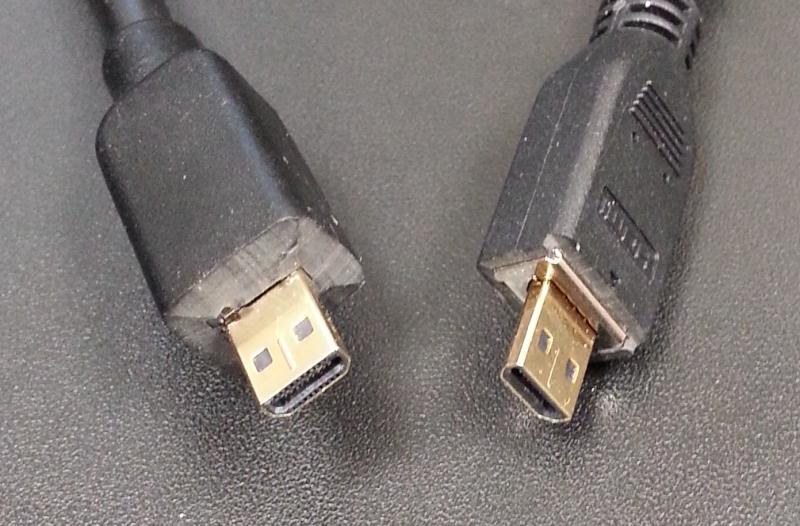 The following users say thank you to arrasmith for this useful post:

Thnak you very much for your confirmation that it should be possible.

I have actually tried cutting away about 1.5mm already (I read your USB cable tip) with no luck but unless I have a faulty HDMI port, it gives me hope that I can get it to work somehow.

I managed to get it working by trimming the plastic as much as poss on the cable and a little on the plastic of the side of the case which was preventing full entry.

Glad you got it working. Personally I would say the design of the case near the connections is a flaw of the tablet. They really need a v2 of the plastic that allows cables to seat into the case. Basically, just an indention.

A second positive if they did that: it would be easier to plug in the tablet at night with the lights off. Black cables plugging into a black piece of plastic at night with no lights ... doesn't work to well.

Oh. And it looks like Onda is now shipping a v973 with the same case design as the v813. So, people cutting up cables and the plastic on the case may become more common.