Part 1: Introduction
Part 2: Tablet performance (Allwinner A10 CPU)
Part 3: multimedia and HD video playing capabilities
The MPMan MID74c tablet is powered by the Boxchip Allwinner A10 CPU running at 1 GHz assisted by an ARM Mali 400 GPU. Let's see how these compare with another ARM Cortex A8 based tablet in the same price range, the Arnova 7 G2, equipped with a Rockchip RK2918 CPU (including a Vivante GC800 GPU). 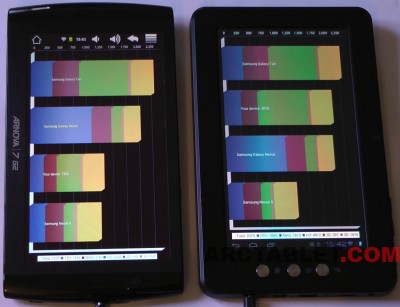 Test conditions:
- both devices were using latest firmware from the manufacturer
- all benchmarks were executed after all tasks have been killed
- test were run multiple times to check for consistent behaviour, the results shown here correspond to average values