Please report any problem with this firmware, I can't verify this custom firmware works as I don't have anymore a Cube U30GT2 tablet to test the custom firmware.

Excellent ! I'm a french user and i tried this firmware. It works perfectly: wifi is ok, tablet is very fast without any bug for the moment. And the arctool program is fine. i think it's the firmware for this tablet  !

But wifi seems to have problems, not for the signal level (very good !) But with the data speed while uploading a big file.. the speed is irregular (900kb/s to 10kb/s by exemple)..is there a patch to solve this ?

Bad news, i have also some problems with wifi. It's not due to my box because others tablets are ok, but i think it's a problem from the original cube firmware. Maybe it exists a good firmware without problem with wifi ?

@chamallows : I don't think there is any rom without wifi issues : I received mine with 1.03 firmware with a very low signal, I experience some deconnections with 1.04 and I'm praying to have no deconnection with this 1.05 firmware.

There is obviously some work to do with wifi and fortunately it seems that updates are regular !

When i lock my cube 30gt2 and leave it alone for 10-20 minutes the wifi is turned off and in the settings i have cheked that wifi will never turn off when the tablet is in standby...

can somebody help??? what should i do better?

And: i feel realy sorry for my worse english, but i am a german user and the germans are very stupid in learning other languages...

I hope i can hear from you soon...

at the right corner near the "+" at right you have the parameters.

advanced>keep wifi on during sleep

I have the same problem with wifi. its turns off when the screen turns off. I used this app from play store and it fixed the problem. but it still show weak wifi signal at home.

I installed this firmware on my cube tablet. Since then, Netflix is totally unusable (see screenshot). Any idea about what might cause this? 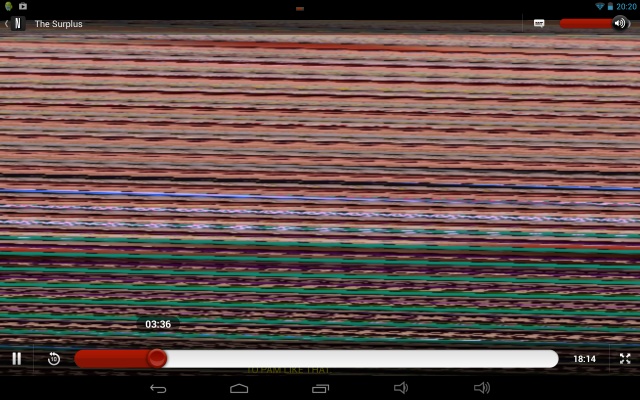 If you go to Developer Options->blahblah->Show CPU usage, you can see that the load average is consistenly above 1.0, largely due to "system_server".  I think this is a bug in some versions of Android 4.1, where the auto-rotation feature is broken and keeps cpu usage at 100%.  The general fix is to disable screen auto-rotates, but this ROM doesn't have that feature in the Settings menu.  Anyone have a fix?

If u open your notification panel, you will see a settings icon on the top right corner. click that and you will see the option to turn autorotattion off

ebeb2: Thanks, you're right -- it's under the "Accessibility" options for some reason.

I'm not sure it fixed it, but that process got bumped down in the CPU list, and I think the CPU load is down a bit.  Is it normal for android devices to idle at load averages above 1?

hi,
im Heer again...
thanks for your answers! The APP has fixed the problem!

but the stupid german "android-user" has another question...
is there any possibillity to overclock the CPU??? may be to 1,8 or higher...
and don't say the cube has got 1,8 GHz becuase it's wrong...
if you download setcpu or no-frills CPU control, you will see that the highest possible frequency is 1,6 GHz !!!
if this was impolite, i fell very very sorry for it but my english isn't the best... just keep in mind, that everything i'm writing here is ment as polite as it could be!
thanks for your help or informations

My Xoom, for example, is showing a load at idle of 0.14, which is common for Linux-based devices.  My Galaxy S3, on the other hand, is showing an unlikely 7.73, and I'm pretty sure it's not doing anything more stressful than showing me my lock screen.  On a desktop device, a load average of 1.0 isn't a big deal, but it means somebody's occupying the CPU.