i have do all steps like in your guide.

The tablet can not even boot.

i only get a black screen! NOTHING ELSE. the tablet is marked found when i connect it but nothing else

Hope you can help me!

This indicates that the images won't fit to the partition layout.

The parameter file defines the partition layout on the NAND. EraseIDB will wipe it.

So make sure you do NOT use other parameter files and to execute eraseIDB properly (in the right window current should count up).

Other typical problem could cause such kind of error are not properly installed usb driver. Best is to use a Win7 PC. Do not use usb3.0 ports.

Here is a Driver Assistant: http://crewrktablets.arctablet.com/?wpfb_dl=1187. Make sure it is in C:. Unisnstall driver first, then install.

- I have the correct USB driver installed. I've reinstalled the one you've linked in case something went wrong.

I am unable to flash anything. and the tab doesn't even boot anymore. It stays black. 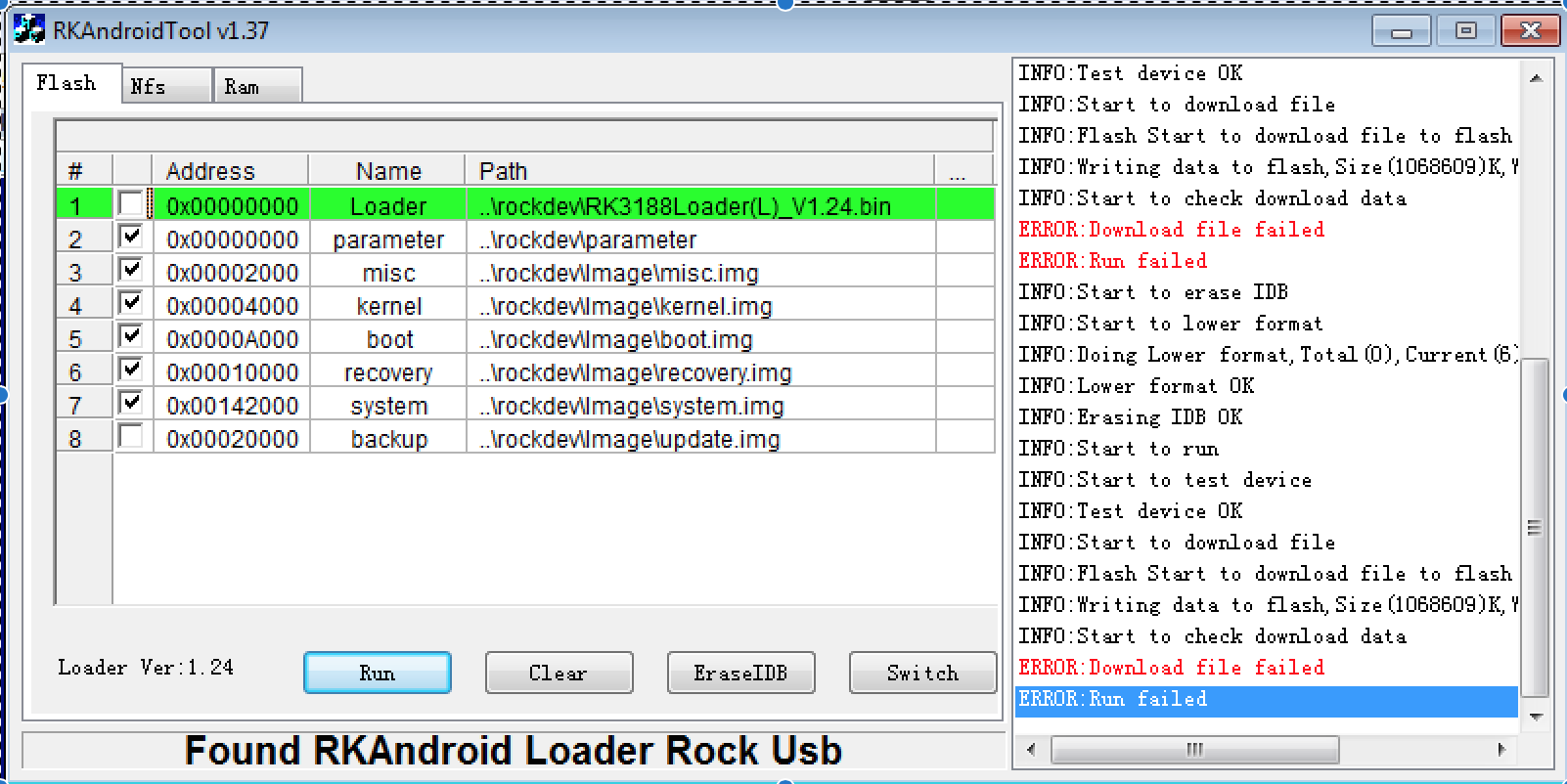 Zip the log folder (RKandroidTool/log) and attach it here.

I guess your NAND is corrupted somehow. Is this build v1.0 or v1.1? Did you change something on the pack?

I had actually your build 1.0 installed, this worked fine.

Then I tried to update to the KitKat Version you've offered here, changed the kernel and the parameter as required and then stared but this happened. after EraseIDB and pressing run this error and then Black Screen with no more function.

Then I've tried to redo the steps of Build 1.0 but don't work anymore. Also Build 1.1 don't work. I've tried and tried ... I got always the same ERRORS.

Is there anyway to get the NAND uncorrupted or another way of flashing back the original or recover firmware?

You can try this: http://crewrktablets.arctablet.com/?wpfb_dl=1631

Instructions (picture) are included. Use the v1.24 loader. After the procedure start directly with the RKAndroidTool, usually procedure.

Thanks Oma for your patience and your support.

Unfortunately this didn't help either.

I got Fails and errors.

I've also tried several usb ports and another even another PC. Any other idea?

do i need to reset the nand somehow or is my tablet completely bricked?

it is quite hard to recover devices with windows as there are mostly fully-automatic tools available. You cannot do singe steps and you can only guess why they failed, after they failed. So the preferred way of recovering devices step by step is to use linux.

For a rockchip device, you can boot from a linux USB stick that you prepared as described here:
http://www.ubuntu.com/download/desktop/create-a-usb-stick-on-windows
Before clicking "Create" in Step 3, pull the lever of "Step 4: Set a persistent file size for storing changes (Optional)" to the right.
This is needed to run linux just on the stick without installing it anywhere else and beeing able to store some additional files wen need.

Now, boot into linux by booting from the stick. Most modern bios allow to select the boot device by pressing F12 in the BIOS startup screen. So you don't have to alter your BIOS settings.
In the boot menu from linux select "Try Ubuntu without installing".

As you might see, the bar on the right shows your local disks so you might directly access your downloaded images for you tablet. What we additionally need is the linux tool to flash:
Press Ctrl-Alt-T to open a terminal window, then...
- Download the upgrade_tool at http://crewrktablets.arctablet.com/?wpfb_dl=2007
- Extract the zip file
- add the tool to the PATH so we do not have to take care of where it is stored

Now we use nautilus (the "explorer" used in Ubuntu linux) to find our images, so use the mouse to click on the drives on the left side and search your drives for the images...
You need to click you right through to the "rockdev" directory, but do not dive into "Images".

Now we can try to flash, but the flash requires root access to the USB system. So we prepend a "sudo" before each command.

if you start this, there is either a red line telling you that no device is found. In that case, your tablet is not connected or not in any bootloader mode. Try again until it shows you an indexed line 1. blablabl rockdev. .... press number or "Q" to quit.
We press "Q" here as we only want to check, if there is a device in LOADER or MASK ROM mode.

However you pretty killed your flash content, so we start from the beginning.
In the console window, change to the directory containing your images... For that in the nautilus window you see the complete directory name. Press "Ctrl-L" and the path line on top will becomes a normal input line. double or tripple click it to mark it completely, change to the console window, write "cd " and then middle click with your mouse to paste the marked path. Press enter. If this doesn't work, mark the line, press Strg-C, switch to console and then write "cd " and press right-klick Insert or "Strg-INS", then press Enter to change the directory.
if you then enter the command "ll" you should see the following files:

In the above example I have two loaders, but you will only have one, so you need to exchange the name with yours in the following examples:

After that, your device has Loader and other images flashed. Only one command is missing:

what reboots the device.

If you get stuck at any stage of this, just respond and ask your question.
I did not explain special options in the upgrade_tool as first I need to know if it get stuck and then where. If everything works fine, just leave a note.

Edit: Added sudo as we did not add the rockchip VID/PID to the udev rules.

The following users say thank you to Astralix for this useful post:

I have successfully flashed omas kitkat rom to rolino tab 8.9.

Maybe it is to hard to read the whole thread to get the hints how to do it...

so here is a short howto:

i assume that you know how to install the usb driver, boot into bootloader and use the RKAndroidTool. Instructions are included in kitkat rom.

copy dynamic parameters file to "KKImage"
ockdev and overwrite the existing one.

flash the rom. after flashing tab boots in stock recovery and formats data and cache.

when tab is booted up, reboot to bootloader again.

after reboot transfer the model fix zip file to tab.

Also you don't need to overwrite any files. All you have to do is  click the line to the right of the files and point to where you have the other files stored.  Copying and renaming them all is time-consuming and unnecessary.

I've flashed all roms with the Windows tool with absolutely no problem at all. (Though I could've also done it in Linux if I really wanted to.)

So... You can continue to explain people who bricked their devices how they should have used their windows tools, but you will not make their devices work again. If you need to recover from a broken Loader or a NAND with erased BBT, you need to use linux and go step by step.

Depending on the cause of the failure you might get the device working with windows tools in two or three hours, but you can get it to work again in 20min with linux if you try it for the first time. If you know how, you can do it in 3min.