With no less than 14 devices (including multiple variants) the recent tablet from Arnova with their third generation (G3) we felt it's about time to make a summary of the different Arnova G3 models specifications, prices and availability. We'll update this article as new information becomes available. 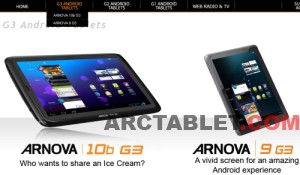 Most Arnova G3 tablets share the same specifications, with the exception for the Arnova 7 G3 with a Boxchip Allwinner A10 CPU and the Arnova 7c G3 which features an Qualcomm CPU.