HomeForumArnova G2 general discussionsBluetooth and GPS support on the Ar…

Bluetooth and GPS support on the Arnova G2 tablets

Bluetooth support is a missing feature on most Arnova G2 tablets, apart from the Arnova 7c G2 which has a different hardware. 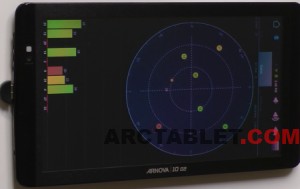 Missing support in the device kernel and system can be added thru kernel modules, to make some external USB Bluetooth dongles work. Fenice57 already did that a while ago on his custom firmware for the Arnova 7 G2.

We have started to adapt our custom firmwares for the Arnova G2 tablets to include Bluetooth support on the devices that offer an USB Host feature. These firmwares should be published shortly, starting with the Arnova 10 G2.

Here is a video of an Arnova 10 G2 connected to a Royaltek Bluetooth GPS using a Daffodil Bluetooth USB dongle (ref. 06M)

The setup to support Bluetooth on the Arnova tablets requires an USB Bluetooth dongle to be connected to the USB plug on the tablet, directly if the device has full size USB connector or using an USB Host cable.

USB Bluetooth dongle
The USB dongle must be based on a chipset made by CSR (Cambridge Silicon Radio, the company has actually…

WOW!!!!!!
A custom firmware with bluetooth dongle support!
Is the first firmware that support it for ARNOVA10 G2. I can't wait..... i must try it as soon as possible!
Jean-Luke

one step forward kudos , i want to understand as to why can't the wifi reciever have the package or a script written for bluetooth to be added to same instead of usb Dongle work
wish !!

Is this firmware available for arnova 7bg2 ?

There should be one for the Arnova 7b G2 DT (resistive Dual Touch) soon.

Is there any plan to release the firmware for Arnova 9 G2? Thank you!

Yes, it's in the plans it should be published later this month (for Android 2.3 Gingerbread at first and hopefully for Android 4.0 ICS later).
Cheers.

I have used the Arc tools 0.68 EZ 2.1 to download the test system on to my 10G2 also got the Bluetooth dongle using the Amazon link provided.My machine has re started fine I have got both Apps from market as seen in the video, there is a light on from the dongle but I cannot turn the Bluetooth ( BT) on. On the Bluetooth file transfer App it just hangs on please wait " turning on blue tooth"and doesn't connect. Have I missed a setting out somewhere I have followed the video to the letter? (build No GINGERBREAD .eng.hwg.20119013.192033. Any help greatly appreciated.

I  have persevered with this and now managed to connect the blue tooth on the file manager App and the blue tooth icon shows on the main info screen.The USB adaptor flashes. however I cant connect to the GPS  side of things I just get a timed out or service not found. On the initial connection I get GPS connected and the ball symbol on the top right of the screen but it goes off again, if I had any hair it would of been pulled out by now, I must be close to sorting this and I am supposing its all only a setting away??? Any ideas to what it could be???

Did you manage to pair to the GPS ?

If yes, are you following the video in going to Settings and activating Mock location ? You need to do "Connect" again in the "Bluetooth GPS" application after that.

No pairing to the GPS is where it goes wrong, as I said I can connect the dongle in the file transfer App. Initially the Gps runs and the mock location works as the symbol is displayed but it cuts out and i get service discovery failed as an error message.

on my ARNOVA 10b G2 CAPACITIVE not work probably because the USB 2.0 port in my tablet is an SLAVE-port and not an HOST-port, otherwise i don't know

Not work? Where have you take the firmware for test??? I've no see the links! The firmware with bluetooth support is released?
thanks
Jean-Luke