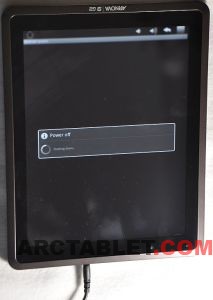 While working on our Arnova 9 G2 tablet review, we quickly encountered a power/battery issue that prevented us to continue our tests.

After leaving a full night of charge and removing the power plug, the device did not start and the power LED did not light anymore when pressing the power button. When plugging in the charger, the power LED did light again and the device started to boot: showing the Arnova logo, then Android system booted to quickly show to the message pictured above, displaying the Power off message and initiating a shut down.

There are also similar reports from other users, gavthomas29 commented on Archosfans.com forum, Fri Dec 30, 2011:

JUST GOT THE NEW 9G2 AND STRAIGHT AWAY HAD TO CHANGE IT.WHEN THE BATTERY WENT FLAT IT WOULDNT RECHARGE,IT WOULD RECHARGE WHILE IT WAS STILL ON BUT NOT WHEN COMPLETELY DRAINED. THE REPLACEMENT I GOT HAS SAME FAULT,SEEMS FROM PC WORLD TECH TEAM ITS QUITE COMMONLY REPORTED,THANKS A BUNCH ARCHOS WHAT GOOD IS THAT AND WHY ARE PC WORLD STILL SELLING THEM IF THEY KNOW THEYRE NOT RIGHT?

This problem seems to be an issue specific to a very local batch of devices, as the majority of Arnova 9G2 owner does not seem to be affected. We would like to have more feedback about this issue, see if it's an hardware or software problem. If you have an Arnova 9 G2, please let us know in our forum if you have noticed a similar failure.

I can say i have no problems with power. I have this model and i charge it for around 3-4 hours. I get around 5-6 hour continuos up time before i hit the 15% asking me to plug in the charger.

same problem here. I have the Arnova 9 G2 for about a month.

first time i have the problem.

I fully charge the Arnova and it won't start.

I hope that the fix the problem..

Let us know, mine did not seem to charge anymore, even after leaving it for 15 hours charging

must be a faulty unit, i dont think its the battery if it does that with the power plugged in but i could be wrong..

"The best person in the world, at the moment" -imstookatboot

After posting i have not had pwer problems, the first time i left my device to over charge. No power. The only fix i can find so far is when this happens is to use the reset button.

Works for now until a fix.

Same power problem occured here: I left the tablet working without charger, battery was at least half-full, came back after 5 minutes..... dead.
Reconnected charger, charging led on, tried to restart.... nope.
Then left the machine without charger at least 1 hour: the strange thing was that it was warm and remained warm, so probably something is drawing current from the battery anyhow.
I had to press the reset before it started again (cold boot, started with calibration)

Similar problems with my 9G2. When screen times out press the power button and nothing. Connect to AC power supply and screen comes on. Also problem shutting down.

Same problem here ! Had it for about a month, then one day there is no more LED light (indicating the power status), and can't charge the tablet anymore. Logged a case but still no reply, 1 week running. Help !

I have the problem on my 9G2 , i bought it last month.

the led don't bright when i plug the power adapter.

What was the solution for you tablet ?

Have a power problem also.  When I plug the charger the red light goes on put never turns green.  The screen is black with the Arnova logo.  No buttons work not even the reset.  Tried to reset several times but hopeless.

this thing sucks. the $100 Coby i bought my son has not stopped once. this is the second one i have got from these fools.   DO NOT BUY ONE. GET ANYTHING BUT ARNOVA. THEY ARE CHINESE CRAP!!!!!  i have returned a 10.1 g2 and 9 g2 the second one has not lasted 6 weeks. the power button will not power it off. the 10.1 g2 screen stopped working after about 4 months. STAY WAY FROM THIS COMPANY. it took more 3 months to get the replacement and it does not work. i would try again but i know if will not work either and my time is worth to much to waste it on this P.O.S. the sad part is my daughter is without a tablet so i have to go get her a IPAD to make up for it. that suck as much because i have to learn iSO. thanks Arnova