So, here it goes the whole process "step by step"...
1 Be sure to copy all your personal files (Music, Photos, Videos, documents) from the tablet to the PC because the process will erase them.
2 Download the "Rockchip Flashing tool" and the "kasty-arn9g2-40-04.zip" as shown here, and unzip them on your desktop
3 Plug the charger to your tablet and connect it to the PC with the USB cable
4 Turn off the tablet
5 (as shown here)
Execute the flashing tool "RKBatchTool.exe" on your computer (On Windows Vista or Windows Seven, you will have to Right Click on the program and select "Run as Administrator")
6 Hold pressed the MENU button
7 Insert a paperclip in the RESET pinhole and keep it pressed
8 When you hear that Windows detect a new device, release the RESET pinhole, but keep pressed the MENU button a few seconds longer
9 Release the MENU button. Now your tablet should be in "Recovery mode"
10 Now the computer should show it has found a new USB device and prompt for a device driver. According with your operating system, select the appropriate driver in the "driver directory" from the "Rockchip Flash Tool" folder.
11 Once the Driver are installed, the square with "1" on Rockchip Batch tool should become green.
12 Using the button in the top right area of the application. Select the "update.img" file present in the "kasty-arn9g2-40-04" Folder.
13 Push the "RESTORE" button and wait till the flash process is complete.
14 The Tablet should now update and reboot
15 DONE!! Enjoy your new ICS device!

The following users say thank you to pampurio for this useful post:

The following users say thank you to vvb for this useful post:

As explained in Rockchip flasher page you should normally use Upgrade button, but pushing Restore button is better as it does a partial format of the tablet before flashing.

first immpresions are very good. Thank you very much !!!!

I have tablet PC arnova 9g2. When i want to put my device into flashing mode and flash the custom firmware file: 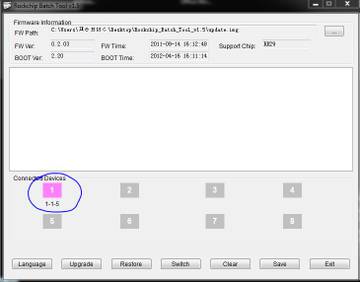 Can you help me? P.S. I cant install driver RK29 device.

virtualvirus said
I have tablet PC arnova 9g2. When i want to put my device into flashing mode and flash the custom firmware file:

Can you help me? P.S. I cant install driver RK29 device.

This is very important step:

10). Now the computer should show it has found a new USB device and prompt for a device driver. According with your operating system, select the appropriate driver in the "driver directory" from the "Rockchip Flash Tool" folder.

I think this is the step where you make a mistake.

Read slow and carefull pampurio's post, no 91, it is on the top of this page and do as it s written.  Can't miss...

I had problem with this too, downloaded both rockchip flashers and updated, with rockchip 1.29's drivers for vista, I have read lots and confirm for recovery mode is menu, reset and let go menu, at this point I updated with rockchip 1.29 drivers and flashed using restore with rockchip too, and can't even being to tell you how cool it is to finally have ICS on 9 G2 512mb.

The tablet can't see all the 512Mo of RAM, only 271Mo. I've already restore android 4 ICS with a wipe data, but the problem still the same. What can i do ? Is there a system file that i can remove or edit ? Thanks for ur HELPPPP !!!

The display just reflects the memory left to the system, nothing wrong here I believe.

Had mega problems trying to put my arnova 9 g2 into flash mode. After a good google session i found this info out. Tried it and it work for me. A lot easier than trying to flash.

I have a problem that I have not seen in any other threads... I have managed to successfully install the drivers for RK29 and to put my tablet into flash mode - no problems. Rockship Batch Tool v1.5 recognised the unit with a green number 1 (and 8-4 below it) - no problem here either... Loading the Firmware (40-04 version) and when I press Restore, it starts the process completeing the Lower Format 100% but when it gets to <Layer 8-4> Prepare IDB Start it stops and after some time it just comes up with an error Prepare IDB Fail and that is it!...    Tried to use the stock dump file to restore back to 2.3 but same problem and now my device will not power up at all.... so total FAIL in here I guess...   Any ideas how to repair this??

have a look here

Thanks for that and I have managed to Erase IDB according to the instructions in there... Now when trying to "Restore" the system it goes past that point with "Prepare IDB to start" and a couple of others successfully, but stuck on "Wait for Loader to start"..

I have noticed that in the topic you suggested it says to press [Run] after erasing the IDB, but when I do that it says"bootloaderFile is not Existed" - although I have copied all the settings bang on the same as in the picture...  Am I missing some important file to be able to proceed?

Just a quick update...    IT WORKED!!!!!!!    I have nearly lost all the hope but it appears that sometimes you just have to try a couple of times before it does the job.. Now I can enjoy the fully operational ICS system!!!!

Just to summarise - what was happening (in case if somebody will face the same problem):

1. I could not flash my device as it was stuck at the "Preparing IDB to start" stage during flashing with Rockchip Batch Tool v1.5

2. When I have clicked on [Restore] it has performed the Lower format, but again stuck on the same message and FAILED the flashing process - also the device stopped working (Unable to power up - bricked!) - I could still see the device connecting to the computer though...

-----> First I had to re-install my RK29 device/driver (computer was re-booted) in order to be able to connect the tablet again.

----> Then I have erased the IDB with the RKAndroidTool v1.29 according to the instructions here:

----> After successfull Erasing the IDB, I have used the [Restore] function in Rockchip Batch Tool v1.5 using the ICS 40-04 image file... It has stuck at the "Waiting for Loader to start" stage at this time and FAILED (which is when I panicked a bit again), but when I have unplugged and plugged the device again and reconnected with the Rockchip Batch Tool v1.5 and performed the same task again - this time IT JUST WORKED!!!

So for all those who struggle - Keep the faith, and keep trying!  The system file IS working and both flashers ARE doing their jobs... Good Luck!!!

PS - Thanks to all arctablet.com blog users for the help in updating my device!!!

fuck  megbaszta a tábot jól  update after not work way