I have a problem with my Arnova 8b 3G , I installed the custom firmware with rock chip according to the tutorial you have on this side.

But since I have installed it the Tablet won´t start properly, it´s always stuck in a calibration loop and it can´t get out of there. I tried to reset it but that doesn´t fix the problem. Then I tried to connect the tablet to my PC ( Win XP ) and he doesn´t reconize it anymore ( It worked before the Update ), I always get an message like " installation failed " when I try to install the drivers (which I have from the rock chip tutorial).

Next thing I tried was to plug it into my Mac and after installing this android transfer thingy then I get the message that I have to unlock the screen to transfer Data ( which is not possible due to the calibration loop). So next step was Recovery mode, i was there before the update to the new firmware so I´m pretty sure that I know how it works.... I hold the volume - Button and start the tablet, when arnova logo displays I release the Volume - Button and when the Android robot displays I press volume + and on/off Button simultaneously but nothing happens the robot just looks weird (not sure if that is normal) it looks like this : 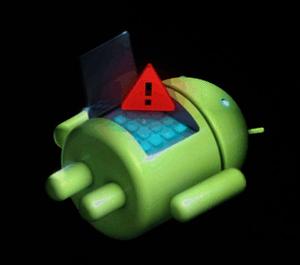 The last thing I tried was to use an SD card and try to install the official FW but I have to click an the install button on the Screen which is not possible without calibration....

Any Ideas how to fix that thing again ?