I tried to root my tablet Archos 97 Carbon , but I made a mistake and now I can't enter in the menu , it's freeze on the logo Archos at the lauch.

But after flashing , and with the appropriate Driver ( RK29 device ) RKB tool didnt recognize the device, so I erase all the file on my tablet to do it again on an other computer a Windows XP familial , and with the proper driver , RKB frecognize it , but failed in the step of downloading the firmware. So I quit the soft , unpluged the tablet who still was in flashing mode and then the device didn't start at all.

So I tried after on my laptop with an other tuto :

With other drivers , but it was still unrecognized by RKB.

This morning the tablet tried to reboot itself but failed , and freeze on the Archos logo , cause I guess the firmware is erase inside.

I pluged it again on my Windows XP computer and it's still recognized , but fail everytime in the process at different level , it's started the downloading , but failed after 50%.

I attached you some picture to show you that's it recognize by my laptop as the proper driver but , I'm still unable to deal with RKB tool.

Hope you could help me on that.

P.s : I tried many many solutions ( reboot vol+ / Power ; update the driver but it's still tell me that's the best driver for now, clear the usb port with USBDeview;...) 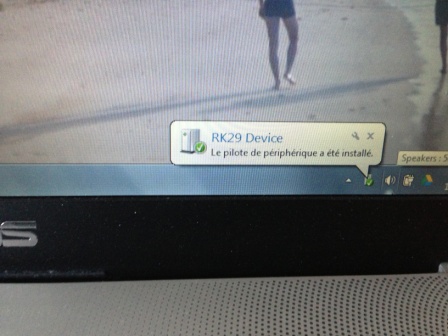 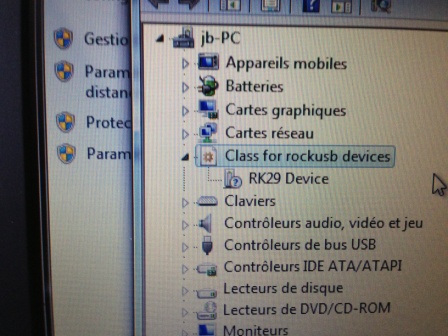 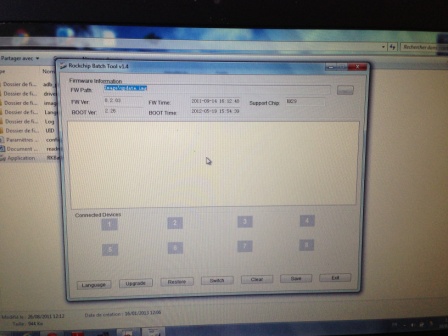 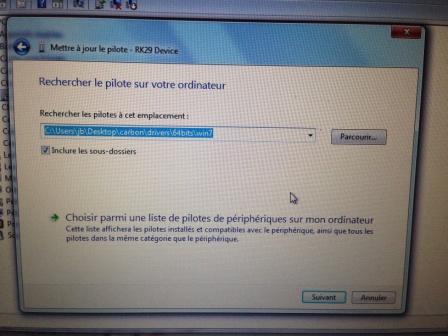 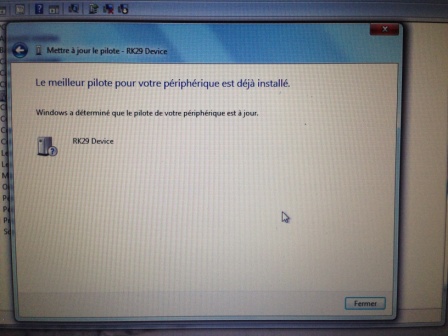 Uninstall all the drivers that you have curently installed.
Try to use a pc with windows 7
Change the usb cable with one from htc/samsung
Use restore, not upgrade, in the flashing process
Try to use the drivers from the amd folder, in some cases it worked well.

But when I uninstalled the drivers , and re-plug my device , my laptop does'nt detect anything , I have to flash it again to get detected by my laptop.

Maybe It's dumb , but when you're say uninstall the drivers you mean desinstall in the  "Device Manager" or delete them from my file that I downloaded.

And I always did restore  by the way , I will try and let you know, but thank's again for your answer.

Do you know how to get the tablet in flashing/recovery mode using the keys/buttons?

I did it with 2 different ways :

1) Hold the Home button and then insert a tool in the reset spot, worked fine , I was able to update the unknown device/driver succsfully like the tuto showed it, but then impossible to be detected by the soft RKB even after desinstalling all the drivers (but not sure if I did it properly )

2) With pressing the volume buton + and push the Power button.

The strange things is that when I connect my tablet on the XP Windows computer with the driver that I installed before on my laptop Windows 7 , RKB still recognized the device on the other computer ( Windows XP ) , so honestly I can't figured out why it's working to be recognized on a computer with I suppose a driver for Windows 7 and why it does'nt working on my Windows 7 laptop.

I even try whith RKB on my old computer to lauch the original firmware of Archos but failed at 1% of downloading the fmw step.

I've got a problem with my u30gt-mini  - need help via teamviewer.

I wrote to you private msg.

Please globula_neagra help me, my arnova 7c g2 its bricked.

Or the tutorials that are in this section
http://www.arctablet.com/blog/forum/arnova-7c-g2-android-firmware-development/how-to-flash-a-rom-on-arnova-1/

i succesfully unbrick it but now the touchscreen doesnt recognize my touchs. any ideia?

I would really appreciate some help with my Arnova 10 g2. I installed custom firmware and all was good until the battery ran out completely. Since then i've not been able to restore it.
I've managed to install RockUSB drivers and tried using the Rockchip Batch Tool but it keeps failing. "LowerFormat Device Fail" is the reason. Any ideas what i'm doing wrong?
Any help would be greatly appreciated.

Did you used restore or upgrade option ?
Did you tried another usb cable ?
Use the usb port from the back of the pc, this does not apply if you have a laptop.

I used the RESTORE option.

I've tried 5 different USB leads inc. HTC, Nokia (2 types) and 2 others i found, one of which was new out-of-the-packet.

I'm using a laptop running windows 8, so i even tried flashing it from a laptop using windows 7 just in case it was a driver compatibility issue.

The process was failing on LowerDevice Format, only this time I was able to see how far it was getting ie. -

then the Current (No.) would stop at say, 981 then after a minute i'd get "Lowerformat Device Fail"

I noticed that the Current Value was getting higher every time I restarted the process, going up by 1 or 2 until, many restarts later it moved on to the next stage.

It then failed on Downloading firmware, i think.
When i restarted the process, it got stuck on Lowerformat again but with a Current value of something like 364!

The first few times i tried to flash it, It failed with the error "Download IDB Fail". It was then that I switched from windows 8 to windows 7 and started getting "Lowerformat Fail"

Each restart involved me doing the following:

This gave me a few windows Pop-Ups of "Device Not Recognised" but after releasing Reset, the tablet would be recognised by the Rockchip Device Manager.

I have been using the latest Arnova update.img every time.

What is the RK Android Tool? Would this help?

I also initially started the confusing ADB & Fastboot process but gave up before connecting the tablet as there was a lot of room for error in the tutorial and didn't want to make things worse (if thats possible), than they are already!

First of all, thanks a lot for your offered help!

It might be connected that I somehow damaged the drivers and then later tried (successfully, it seems at least in windows device manager) to recover them with SuperOneClick.

Anyways, it seems like I'm in desperate need for your help...

I really hope you have time to take the case

When you connect the tablet, does the pc react in any way ?

I already managed to fix it with help of your other post: http://www.arctablet.com/blog/forum/arnova-7c-g2-android-firmware-development/how-to-flash-a-rom-on-arnova-1/#p6516

Thanks a lot, it was very helpful and seems to work fine now