The Arnova 10d G3 Android tablet has started to sell a few days ago. A few shops like Conrad.de in Germany or Auchan in France are already running promotions under 120 euros, making this 10 inches Android tablet a great deal on the market. Still, the buyers feedback we gathered on the Internet, give mixed echos: some are quite happy with their new tablet while others are mentioning serious flaws. Let's have a look ! 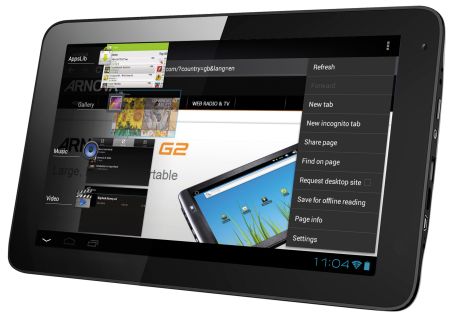 Update 2012/11/21: We have added a video showing the (poor) screen viewing angles, see in the users reported issues below, thanks Mannix.

There is some users feedback on android-hilfe.de german Forum, if you want to save yourself the 30+ pages of forum reading in German 🙂 you will find a summary below:

On the performance side, comparing with the Arnova 10b G3, it seems the Arnova 10d G3 got a little performance boost with its Cortex A9 Single core running at 1.2 GHz. Still, it shows limited performance compared to actual Android tablets powered by recent processors such as the Rockchip RK3066 that we added in the comparison table below (Cube U30GT-H model)

Based on the product specifications and users feedback , the Arnova 10d G3 looks like a good entry level Android tablet for anyone interested in a budget 10" model. If you can do with the relatively low CPU performance and the other limitations we noted in this article, the 10d G3 model should be OK for you to handle simple tasks such as web browsing, video/music playing, Youtube, eBook reading... If you really want more, it may be wiser to wait for a few weeks as new devices with better screen and more CPU power that will probably be available at less than 150 euros near Christmas time.

Can confirm both issues, tried to use a Lexar Class 10 32GB and doesn't work.

Screen quality is poor but no flickering or color issues, just cheap. Hope it lasts more than 6 months!

Thanks for your feedback.

Any chance you could make a video (preferably HD) of the screen, so we could see how it looks: colors, viewing angles, brightness, backlight ?

I will make a video, the screen is power hungry but pretty good for that price, good viewing angles, decent brightness.

Sadly in my opinion it's better to think more than twice before buying it. It needs urgently a new firmware, it's almost unusable as it is.

I found sometimes the WiFi just die, it disconnects from the network after 5-10 seconds and you have to disable/enable from settings to make it work again. Soft reboot will fix, but until you does it just happens again and again.

The SDcard issue is much more worst than I thought at the beginning, the 8GB works but after a while it becomes unreadable.

Plugging out the system complains about an incorrect removal and when it's in again it creates a "LOST.DIR" directory, found a file I had downloaded being corrupted.

The downloads are another nasty bug, after some time the "download" directory in internal nand just vanish with everything inside.

Got also sometimes freezing for 10-20 seconds, a couple of times had to shutdown the tablet keeping power button pressed.

It looks has been released on a rush, until there's a new firmware fixing the bugs and improving the reliability it's a waste of money.

Hope also for a custom firmware will be out that can enable google apps and full market.

there is a firmware available

Yes but this is the initial firmware, not an update.

Hope they can deliver something quick or this tablet is going to get a bad reputation.

mannix said
Yes but this is the initial firmware, not an update.

Hope they can deliver something quick or this tablet is going to get a bad reputation.

I have read reports that Google Play is fixed with this update. You could install it to see where it makes any difference. Arnova guys always like to put it things in a firmware update and not always mention it.

This is the shipping firmware, the same version installed when I bought it.

Goggle Play store it's working, I had to mess a bit adding/removing the google account and finally erasing data from a bunch of google apps and services.

But the tablet it's not certified so many apps can't be installed and doesn't show in search results. Tried to install them from Cyanogenmod gapps for ICS but the install fails.

Not a big deal, I'm missing only GMail and for sure a custom firmware will fix that.

I'm much more worried about sdcard and wifi issues, they are pretty serious and I'm not sure a custom firmware can fix that so easily.

Had a chance to use the tablet for few hours.

I downloaded some files that I needed on my PC so I tried to copy them to the sdcard.

The copy failed so after a few retries I decided to plugin a USB stick.

I found the same problem but worst happens with USB sticks.

Errors copying and frequent dismounts, it looks the problem is system wide and not SD specific.

At then end after many retries i was able to copy to sdcard and I gave up on the USB stick.

Will do the screen video ASAP.

I see from the specs here:

I can indeed confirm IT IS supported, mine is connecting at 150Mbps.

The viewing angles video is on Youtube at this address:

Sorry for the poor quality (anyway 1080p) but I only have my phone camera, galaxy S2, and it sucks.

No one is known working on a custom firmware?

I'll correct the article, will add your video there if you don't mind

What is needed in a custom firmware on this machine, root I guess, fixed Google Play, anything else ?

Don't mind at all, link it!

Yes my wishes for the CFW are: fixed Google Play, root, but mostly would be nice fixed Wi-Fi & mass storage.

I just had a look on the update from arnova`s website, and i have these conclusions
It is using a rather old file system (YAFFS)
I will make an assumption and say that it can be rooted with superoneclick, or the root pack that i made for the 7cg3
The modules are loaded from system/modules which is an unusual path, normally is system/lib/modules
i can make an unsecure boot.img which should allow changes to the file system if root is enabled.
After root is achieved i can make custom firmwares for this tablet.

These are the 3g chips supported:

I will update the post when I will find out something else.

I did not try but the device can be rooted pretty easy if you are lucky with the SDcard, check out this thread (in german) under "Rooten":

Information about the connectivity (Bluetooth, Wi-Fi)
http://www.mediatek.com/en/Products/featured_content.php?sn=7
This is the chipset used.

There is present also some folder with some settings for a UART mode
I will presume that this tablet has also a fastboot mode from which you can flash boot/recovery and system.img

We can solve the Play Market issue by editing the build.prop values
ro.product.brand=WonderMedia
ro.product.device=wmid
ro.product.board= (this one is blank, i don`t know why.)