We recently announced a series of custom Android 4.1 Jelly Bean firmwares for Arnova G3 devices. The Arnova 10b G3 tablet is the first tablet to receive a custom Android 4.1 JB firmware with root and few extra features. This firmware is based on the Oma JB, the work of OMA, a respected xda-developers.com who has produced many great firmwares so far for Rockchip tablets, thanks a lot to him for that. We have modified this firmware to make the flash process easier on the Arnova 10b G3. While this firmware is already very stable and brings some great additions to the original 10b G3 firmware, it suffers a few limitations: the battery indicator isn't working properly and the video camera picture is mirrored horizontally. 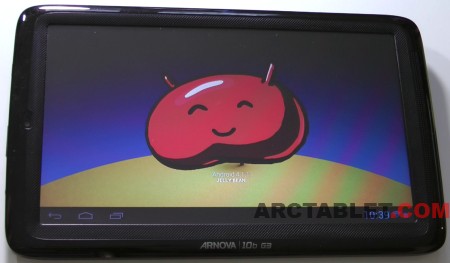 The Picture in Picture (PIP) function is a great new feature of the Video Player that let you put the playing video in a resizable and movable window, so you can watch a movie while you continue to use the Android tablet for other things. This feature is similar to what Samsung offers on their latest Galaxy SIII and Note II with the "Pop Up Play" feature. 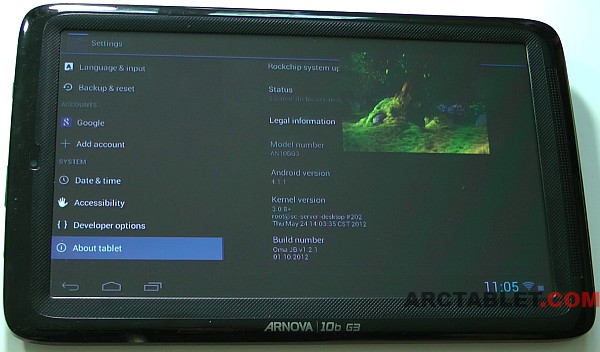 Before starting, please make sure you backup all your existing apps, data and files that are on your tablet as they will be erased during the flash process. Also make sure your device is connected to the power.…

will this works on a 8 gig version too.

The following users say thank you to snakekiller for this useful post:

Thank you guys so much runs like charm an arnova 10b g3 8 GB .
PIP player is great surfing and watching videos at the same time awsome.
Changed the dencity in build to 110 perfect.
You have done a great job if you can fix the batterie bastard it would be wonderfull.
Keep rocking
Best regards

I have done a small update, see blog article

Battery and camera issues not fixed yet.

I'm struggling with this. My 10b has your other .42 firmware in place at the minute and I want to switch to this one. So, got the tablet into recovery mode ok but when I try to install the rockchip driver (1.5 version) for it on my xp pc, it tells me that the wizard cannot find the necessary software even though I have navigated to the correct folder. Any ideas please?

does it work for dual touch model?

dafnos said
does it work for dual touch model?

Capacitive model only at the moment, I'll eventually make a DT version if there is enough demand.

Here are some problemes i faced.

1.Tablet not chargeing (i know batterie indication is stuck)

3.After Shutdown direct Reboot no Power

Thanks for your report.

We'll hopefully find a way to fix the battery issue, this is probably the biggest problem with that firmware.

Regarding your point 4. I suppose you're reporting that some advertisement stopped to display ? Well this is due to a modified host file that stops most publicity to show. We'll probably put the original host file back in next firmware build so they show again, for those who need, it's always very easy to install an ad blocker from Google Play Store (great apps: Adfree or AdAway).

Wow, just got this tablet & 4.1 runs much better than ICS!

hope you are able to fix the battery icon in this build!

Thank You Very Much!!

I`m new here and this is my first post.

I live in Arnhem the Netherlands and have followed this forum for a long time now but decided, after buying an Arnova 10b G3 myself, to join in.

I have the DT version and would be very happy (ecstatic) if you could make a 4.1 rom for this..... (please)

While it's relatively easy to build a special version of the firmware with the Arnova 10b G3 DT kernel, I'll need to figure how to make sure the Arnova first time use wizard is properly launched and it triggers the resistive screen calibration routine.

I'll have a look and will let you know.

I really wonder why Archos made the 10b G3 use that annoying calibration routine anyway...

But i have high hopes that you`ll succeed in by-passing this problem.....

Please note that this Firmware is only a test build!!

This custom firmware build is not ready for daily business yet
So if you want to use your tablet without a conected charger, you should stay with 4.02 1gb app space build.
for the PIP function you can use StickIt player.
This build is only for development showing the main new functions and posibilities
Kind regards