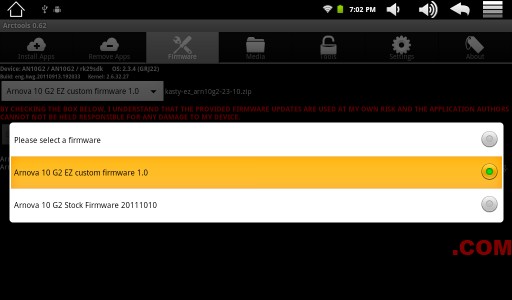 We have received many comments from Arnova 10 G2 users on how complex it is for them to flash a custom firmware. While we are working on better documentation and tutorials for the flashing procedure, we decided to make a very simple firmware that is very similar to the default one from Arnova and very easy to install. This article will tell you more about our Kasty EZ firmware, to get you a working Google Play (formerly Android Market) on your Arnova 10 G2 Tablet in less than 10 minutes just from your tablet, without any drivers or computer needed.

This firmware is made for and has been tested only on Arnova 10 G2 tablets with 8 Gb Flash storage. It should not be used on other tablets, especially Philadelphia Inquirer or HSN models that would loose their default software.

For Step 1, instead of using Appslib, you can also choose to manually download and…

Guys ... Nice work ... but the Market is very low on apps and the fix does NOT work. At least not on my 10G2. Anybody had success with this . Helllppppppp 😉

Do we know if this contains any other fixes, for stock issues or flash 11 support as they have done for the 7g2?

Unfortunately Philli firmware came out right after I prepared this EZ custom firmware, so it's not based on it. Still, I'll have a look at it, so I can confirm if it brings any improvements on the old (october 2011) stock firmware and will eventually make it into the EZ firmware.

Guys ... Nice work ... but the Market is very low on apps and the fix does NOT work. At least not on my 10G2. Anybody had success with this . Helllppppppp 😉

The Market fix should do it, can you try one more time, either the full Market fix procedure or just a Clear data on the Market application, has show on the firmware video.

Also our Arnova 10 G2 FAQ made by Steve on the WIKI has different tips (that requires ADB), check Tip 3. (that refers to tip 2.)

This firmware was tested on at least 4 devices before release and the Market was fully working on all of them, for some after the Market fix procedure was applied.

If there are more reports on this issue, I'll eventually include the Fix procedure in Arctools...

It is correct that the Market fix(complete/full/adb) peopel are not just stating this because they did something wrong. (I easily installed kasty v2)

which in short was download the .apk files and install in particular order clear some cache/data files restart / log into gmail restart then it worked.

It works .... should have watched all the video first lol. The instructions in the market fix link say to clear the cache not the data, but thats wrong as the video shows YOU CLEAR THE DATA ... Yippeee all working. Thanx guys ...

I'm having this issue: I've installed it through the RockChip manager, now everything worked until the reboot.

It formatted everything and all, but when my device tries to reboots it seems to hang on the Arnova screen. It's been this for already 5 minutes.... any suggestions??

When I install the custom firmware like this, Appslib is not installed on the device, any Idea how this comes??

Which Arnova 10 G2 model (how much storage, is it the Philly model) do you have ?

What do you call the Rockchip Manager, is it Rockchip flashing tool ?

Using it for flashing is not necessary, you should flash it like a regular update from Arnova.

If the device is stuck, try to flash again using Rockchip flashing tool.

If it does not help, use the tool to flash again the stock firmware from the manufacturer and see if the tablet boots again.

the device works fine when I flash it back to Custom, however I dont have appslib.

I've found the apk for it and I'm going to try to install the update through arctools.

EDIT: OK, I'm freaking out, last time the custom rom worked fine... Now I installed it and it still give me the Arnova screen for 3 minutes already...... After the flashing I keep my USB in the device and I hear some USB-noises (connected/disconnected/Connected again). Do I need to disconnect my USB before the 1st reboot?

Or do I just wait and hope it'll work after 20 minutes?

EDIT2: Still not working, could it be because I did the following: I tried to upgrade from Finless directly to Custom (that worked) => To Custom EZ rom => Didn't boot => Custom rom (doesn't work either)

EDIT3: In RockChip BatchTool 1.4 I've now used the Restore button instead of Upgrade, after formatting uDisk it says wait for reboot 4..3...2..1.. and it's booting now as we speak

SOLUTION:THIS DID THE TRICK, USE RESTORE instead of UPGRADE !

Hi - please help!
I used the video above to install the market place on my Arnova 10 G2 8GB and it all worked fine.
However, i bought my son the same tablet and did exactly the same thing BUT at the final stage, the tablet won't reboot.
I cannot turn it on now!!!
PLEASE HELP!!!!

Hello,
Even if the tablet does not boot anymore, you can use this tool to restore either the manufacturer's firmware or our EZ firmware.

I've installed EZ custom firmware and it works! Thanks!

Some feedback on my (wrong) assumptions and decisions might help you if you install EZ:

10G2 got bricked after the 10 minutes procedure. Well, actually it gave a parse error and I rebooted anyway before it got bricked. I then decided to flash the EZ firmware.

Took me a false attempt to notice the EZ firmware cannot be flashed with the ''standard'' flashing tool RKBatchTool.exe, but requires the alternative RKAndroid Tool v1.29 (RK29update.exe Windows application).

After spending some minutes trying to find this RK29update.exe on the forum, I saw it is included in the download of the EZ package.

It took me a a couple of tries to get the 10G2 in the recovery mode (pressing + and reset for approx. 15 seconds). The screen did go black each time... Maybe I pressed both buttons too long?

The img files then got flashed easily and the 10G2 booted like a dream. Last version of Market installed with arc tools 0.57 also like a dream.

Market fully worked, but then I missed one app. So to be sure I applied the Market fix (clearing cache from market app, and data from another), but that in fact introduced the ''market missing apps'' issue. The fix then didn't work. I solved it eventually by deliberately screwing up the market app (I removed the data) and then reinstalled it with arctools. Later turned out that the app I was initially missing was not released for 10G2 and was therefore filtered from the market app-results....

Only thing I notice now is that after rebooting, the callibration program crashes. But who cares about that? I don't.

Thanks again for the fine firmware and access to the market!