The Arnova 10 G2 has been left without Android system update and hasn't evolved from Android 2.3 Gingerbread. By chance, Arnova recently released the kernel source code for some of their tablets (thanks HaroldG). Based on this source code, we have built a Linux Kernel that let the Arnova 10 G2 run Android 4.04 Ice Cream Sandwich (ICS). 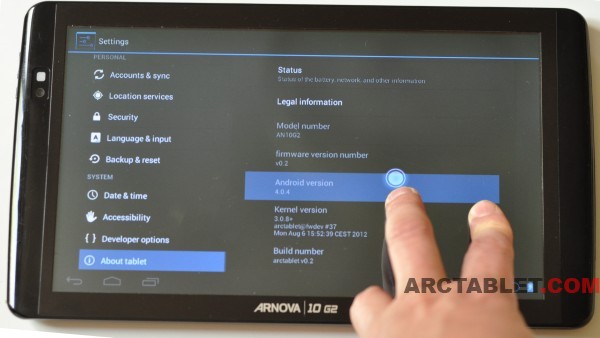 Our current test firmware is a proof of concept, we have a kernel that properly boots the device, but only few components are working so far:
- screen: working
- sound: working
- USB host: working (tested with mouse)
- touchscreen: partially working
- acceleremoter: half working (axis problems)
- camera: half working (inverted on y axis)
- wifi: not working

As you can guess, it's still a long way to get everything working and there is no certitude we will ever succeed in making a stable Android 4 ICS on the Arnova 10 G2.
No need to ask for a release date for the files, a test firmware will be published when it's ready.

Would be great to extend the life of this great tab.

Sweet! This should be a slick OS for the Arnova 10 G2

as most ICS devices run on 2 cores with more RAM , i think ICS will choke the low specs on the G2 , however i hope im wrong , nice work folks !

I think with enough compassion and support this will be a great project to look forward.
I'v seen many devices porting ics to older devices so I'm pretty sure that these good devs will succeed

Thanks to all the developers

I ran native Android 4.0.3 on the Arnova 10G2 and it was very responsive and fast but none of the drivers did work out of the box.

I would imagine that it is just as responsive as android 2.3.1 just need to configure the source and kernel to match the memory demands, etc.

I am just glad that Arnova made their GPL source available for the public and devs that would like to do 3rd party upgrades.

Plz give us downlaod link when You , developers,
will finish the ICS on 10 G2. Waiting for it!

when can we expect the ICS for the Arnova 10 G.

No idea, it's a work in progress and it's advancing slowly

Has there been any progress?

Not much, we'll report as it goes.

Whats the latest on this?
Any new developments?

We're still focused on Arnova G3 and should get back to work on this one when all G3 custom firmwares are done.

Hello,
Have a 10 G2 8 Gb ( for 6 months + ) thats been os upgraded and works pretty well. Only problem is it keeps losing loaded/stored programs such as OfficeSuite Pro and firefox. ( Fix is to Press the reset and they re-load ) Battrey life 4-5 hours continous use. I really like the feel of the unit and size and it has proved good value for money. 32 Gb micro sd used for storage and I really like the full USB which allows use of memory sticks on the go. Compared to an ipad which has limited conectivity and of course Apple only applications / software it v good. (Started my computer life in 1978 with a Commodore PET - so loads of gear still working !! ) Higgi.