NOW THAT WE SEEM TO BE IN A BETTER POSITION TO USE OUR TABLET TO ITS MAXIMUM POTENTIAL THANKS TO THE HUGE EFFORTS FROM BOB FINLESS IN HIS V1.1 FIRMWARE AND BY OTHER MEANS TO INSTALL THE ANDROID MARKET IT WOULD BE GREAT TO START A DISCUSSION ON WHAT USERS THINK ARE THE GREAT APPS, COOL GAMES AND SOFTWARE TO IMPROVE THINGS ON THE ARNOVA 10G2. ALSO APPS AND GAMES THAT ARENT SO GOOD OR DONT EVEN WORK.

This will hopefully create a valuable source of information so we can all have a great experience using it !

Some of my favourites....

and nicer to use and look at.

LAUNCHER:           The Android launcher(to newbies the thing that controls the interface, scrolling etc)

is just not good to me. Having tried quite a few I have settled with ADW EX Launcher

it is butter smooth when scrolling through screens, you can customise it with themes

SOFTWARE:           Anycut(suggested by user DWL99). You do not have accounts and sync built into

that gives you them. Now you can see the accounts set up on you tablet, add

These are just some that I could not without lets see what you are all using?

I am a GO Launcher person here.  I tried ADW and it was nice but Go Launcher has some very cool integrated widgets (mail, weather, task bar, switcher, etc) and is much more customizable in my opinion.

Also they have a GO contacts app that also works with the Arnova and it will pull all your contacts from Google and sync them.  It's a pretty nice contacts app!  I will try yours though to see how it works.
https://market.android.com/details?id=com.jbapps.contactpro&feature=related_apps#?t=W251bGwsMSwxLDEwOSwiY29tLmpiYXBwcy5jb250YWN0cHJvIl0.

I am kind of a tools nut and I like Android Assistant.  It has some cool feature in it like controlling start up apps, etc.  The best thing is the Android Assistant (4x1) Widget!  Put that on your desktop and you can instantly clear running apps and free up system memory space.  I use it before launching a game as it closes all the background stuff and frees up the processor and some memory for the game.

Others have mentioned it but Titanium backup is a must!  At least for me as I flash a lot playing 😉

Root File Explorer!  Again I am a tools nut but see my recent post on adding a animation boot up and you will see at some point you may need it.

File Expert is also another good file browser.  Spports backing up individual apps and some other cool features.

As Damo said MX Video Player seems the best and I have tried a few.  Seems to play anything you throw at it.

Install Google Voice search from the Market!  It adds a mic to your keyboard and to search bars.  Great for when you dont want to type something in and for me works pretty darn well!

A must keyboard replacement so much better that the standard one.

I could not see anybody going back to the standard one after using this!

Titanium Backup: a must app for backup and restore apps, especially for those with license keys, doesn't want to lose them!

ES Task Manager: come with startup manager for disabling those apps not involing in the OS bootup process but start themselves, saving memory. It also has a widget to automatically kill those idled apps to free up memory (most android apps seems still running in background even you quit them by keep pressing the back/escape button)

CacheMate: use to clean up cache data which eventually free up some storage space.

MX Video Player: one of the best video player which supports most of the video formats.

QuickPic: photo viewer replacing the stock Gallery which running so slow when startup.

Gtasks: for synchronising the tasks with Google

Jorte Calendar: so far so good, love its widget which can choose different display type like displaying calendar, weekly or agenda depending what information you want to see.

FlightTimes: flights schedule for airports around the world, important for travellers.

Dolphin HD: with quick access tab and more options than the stock one.

iPhone Style Folder: lots of apps but not enough space on screens? Categorize your apps in different groups by putting the icons into different folders.

A really cool system cleaner, not just a cache cleaner way beyond that. That is the free version above and you can pay a few pounds to unlock pro features!

If you want to try a free music and video player check this out.

my fave thing has to be my modded keyboard, go to http://www.gimpsta.com/themer/index.php and create your own! It is a free service, i use it on all my devices, find it much better than any other.

It's video mode gets my vote for a worst app. When I try to play something on my sdcard it simply plays the first thing it finds in internal storage. Then it leaves a movie image burned into the background when I switch to settings.

wifi file transfer tool, works great and seems to be faster and less hassle than removing your sd card and transferring items from your pc.

it does other things too but i use it mostly for file transfer.

Ever see a post or web site talking about a android app and you cant find it in the market?  If they show one of those square glyph barcode things then use this app.  Point your camera at the barcode displayed (a little tough with a front camera only) and get it lined up with the red line and BAM!  It takes you right to the app in the Market.

NOTE:  Go into settings for the barcode app and at the bottom reverse the camera or it wont work!!!

I love using the PAD plug in to the Go Keyboard.  It's great for typing using both hands whilst holding the tablet as the middle of the keyboard is used for the numbers and special characters and both sides of the keyboard are nearer to the extremities of the screen.  It sounds daft but works really well..

It also has arrow keys! 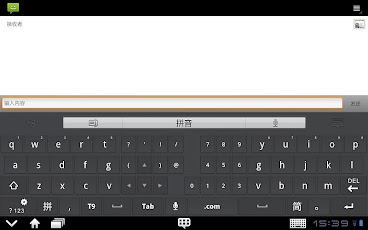 You can flash now and get a ton of /system space!

You can flash now and get a ton of /system space!