A few days before CES 2013 tradeshow in Las Vegas (January 8th to 11th 2013) , ARCHOS is just announcing new products. The first device is the ARCHOS TV connect, an Android 4.1 Jelly Bean set-top box for SmartTVs. According to the press release, the TV Connect is Google™ Certified with Full Access Google Play Store and will be available starting in February, 2013 for £99 (that is ~ €129 or $129)
The second announce in the press release is the ARCHOS Elements Platinium device, a new Android quad-core Android tablet with HD retina like resolution (2048x1536) IPS screen.

The TV connect is a small device targeting home entertainment on the TV. Henri Crohas, ARCHOS founder and CEO already mentioned such a device as one of ARCHOS 2012 projects in an interview late 2011. In the press release he's now saying:

"As a pioneer in multimedia Android devices, we wanted to create a bigger, better way to enjoy Android [...] The ARCHOS TV connect provides users with a multi‐touch, multi‐media Smart TV experience powered by Android.” 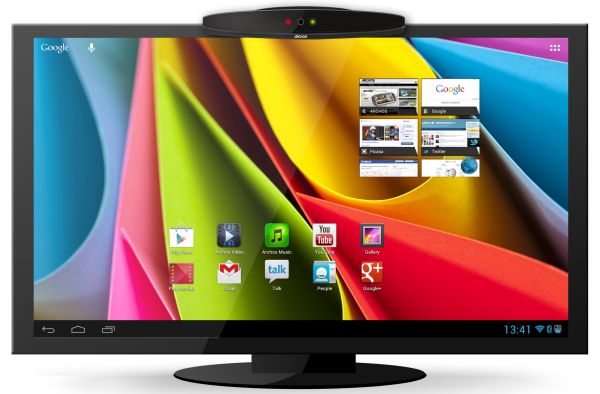 The idea is similar to Android MINI PC (also known as HDMI Stick) which are devices made to connect to a TV, as they don't have have a screen or internal battery like in a tablet / phone. The TV Connect comes in two parts: the Android device itself that is connected to the TV with an HDMI cable and a TV Touch keyboard/remote control.

The Android device is designed to be clipped on top of a TV, it is the "computer" part of the TV connect, it offers a full USB host connector, an Ethernet port, a micro SD slot, a HD webcam and a LED notification system (that should help to warn you for incoming calls while watching TV) The webcam is announced to…