ARCHOS reveals their budget smartphones: 3 models from 80 to 250 euros

After offering a DECT Smartphone for the home and additional 3G functionality on their tablets, ARCHOS is now fully entering in the smartphone industry. The first three models of their Smartphone line rumored these last days are now officially announced, they range from a 3" model to a 5.3" phablet tablet-sized phone.
All phones should be distributed in retail channels and won't be tied to any wireless carrier, they will ship SIM-unlocked and offer dual SIM capability. Other common specs for the 3 models include: Qualcomm processors, IPS screen, dual camera, GPS, Bluetooth and 4 GB of Storage which can be extended with a microSD card. ARCHOS announces these 3 phones will be the first models to ship, should be available end of May 2013 at the following prices : ARCHOS 35 Carbon: 79,99€ / ~$105 / £79.99, ARCHOS 50 Platinum: 199,99€ / ~ $260 / £179.99 and ARCHOS 53 Platinum: 249,99€ / ~ $326 / £199.99. 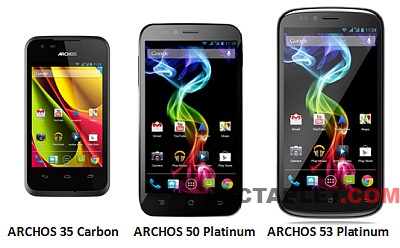 All models are said to be Google certified with Google Play Store access, Google Mobile Services including Google Now. 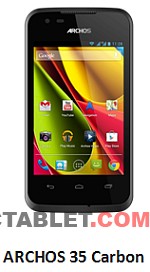