With the GamePad, ARCHOS made one of the first great Android portable console. During our product review on a pre-production model a few weeks ago, we regretted the short battery life. Since then, we have been doing some extra measurements to report the battery performance on a retail version of the GamePad in different usage scenarii.

According to hailrazer member in our forum, who did some surgery on his GamePad, the following specs (3.7V, 11.1Wh) are printed on the Lithium Polymer (LiPo) battery. This represents a 3000mAh capacity, but it seems to deliver really less in reality.

With the supplied 2A charger, it takes about 2 hours and half to get the tablet battery fully charged. 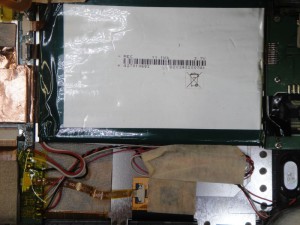 From a fully charged tablet, we let a test scenario loop until the tablet battery gets empty.

Unless mentioned otherwise, our battery life measurements were done under the following test conditions:
- using latest firmware from 2012/12/27 on a retail device (Android build signature:

In each test, the battery level is monitored using our ArcTools application.

This first test deals with playing this video file big_buck_bunny_720p_AAC.mp4 (Big Buck Bunny 720p, stereo sound in AAC format) in loop until the tablet battery gets empty. We have done 2 extra tests measuring the battery life with display brightness set at minimum and maximum values. 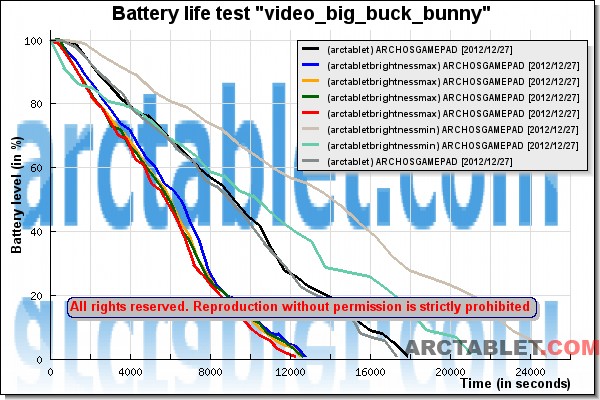 Although Archos Gamepad has best price, but if Archos company upgrade hardware for more better than and increase price, I will still buy it.

About battery life, my feeling are:

_Short time when I play game (of course)

_But, when I exit all app, device running in stanby, it's still short life

Then, in the stock rom, I have been disabled a few functions, battery life improve (but not much). After flash Sigmax-JFG rom of sigma.nl and replacement the stock launcher by NOVA launcher, I could say: it's better than the stock ROM very much.

Không có gì để ký
My English not good. So, If I'm wrong, please correct me. Thank you very much!