After reviewing all the comments in this way too long blog, I'd say dgaid is the one with "the issues."

I'm looking for a tablet and saw a reference to tablet sprint at some place and came across this blog.

I actually work in law enforcement and couldn't find any legal complaints filed within California state records so I'm much more opted to believe the company, a lot of dgaid's comments just don't jibe

I was right about "Samath's" friends and her new addition to the tactics of TabletSprint customer service:

New member davidshriverne created and account and posted his valuable response on  2014/01/16
00:18.

15 minutes difference.  I bet those were created from the same computer. Therefore,

"j" in jarodreiter and "d" in davidshriverne means "Stupid Samatha".  You can not even fabricate fakes  cleanly.

I just happen to catch Djaid commenting again, a few minutes after me.

Actually, his facts are not correct. if you look at the previous page, you can clearly see that the two other commenters are a day apart in the date they created their accounts.

Working with criminals on a daily basis, it's often easy to see "holes" in their account of things.

It obviously shows they joined on different days.  I'm not sure what matter it makes anyway.

Nice Try, Djaid, you obviously aren't a very good liar, and I have the pleasure in dealing with liars everyday

Dgaid is NOT the only one complaining about poor services of TabletSprint. Poor communication (they communicated only until they sent the order and I paid. Never responded to my complaints in their shop), defective devices and poor customer service, mixed up orders, delays (if it's not in stock) and excuses.

As for your "ïnvestigation" of accounts. I have no idea what you are pointing to. And before someone like you starts questioning my identity and honesty too I suggest to read my first post here and look me up (I will respond in FB or LinkedIn if you want to confirm that I am indeed the person I claim).

Further more, this is not the only place people are complaining about TabletSprint

The following users say thank you to pavelu for this useful post:

I do not believe that you have something to do with law enforcement (from the positive side of it).

In case you have difficulties clicking on the link I provided, I attached a screenshot of BBB page.

Proceed to the "Complaint Resolution Log",  click on the green "+" button "BBB did not receive a response from business."

BBB does not give access to the body of complaints, because there is information about the person who posted it.  For that, I made the screenshots from my complaint.

The comments from two persons I responded earlier were posted with 15 min. interval, do not try to confuse people.

There are no criminal complaints - there will be, soon.

The attachment is here: 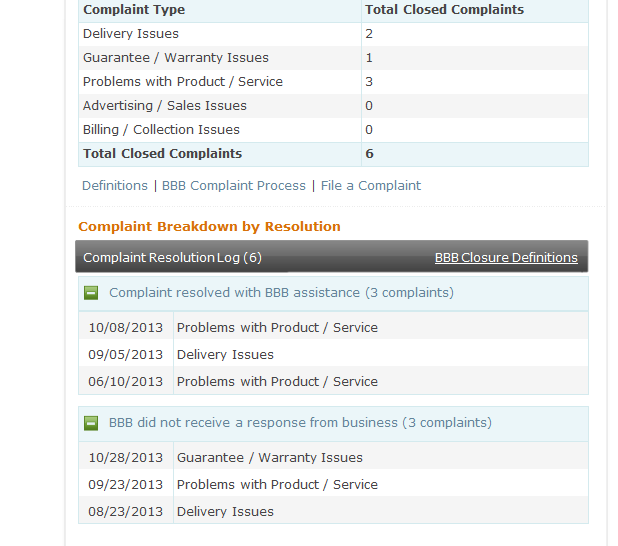 Thank you for finding another discussion.

We need to keep them honest.

I encourage all people not to let it go and help other potential victims by sharing their negative experiences.  Next time it might help you.

This is the only reason I keep demonstrating the "customer service" practices.

I will  update the information about my following actions.

I've earlier seen and reviewed  the  above mentioned pavelu  link too.

There are a few positive reviews  about the company on the site mentioned and a few negative ones.

The company looks like it's been around since 2012 and I count 3-4 negative complaints total.   That's nothing.  I think if there were serious issues, there would literally be dozens and dozens of complaints.

People complain online about all sorts of things, some frivolous, some not.  Some fairly reasonable, others completely unjustified or questionable.  Five percent of the population is crazy, and those are the people whom typically complain the loudest and irrationally make a big-deal about things.  Then you got the complete Crazies like this dgaid character.  These are usually the same people that take to writing comments to online news articles and go off on tangents about all sorts of ridiculous stuff.

From what I've seen, it certainly seems like the company makes a serious effort.

A lot of the negative reviews totally diss products and/or performance, but in contrast, in reviewing general product user reviews and tech forums, you don't see any of these issues mentioned from the tech pros that review and use these products on a daily basis, and the pros actually give solid marks on these tablet brands like Pipo.

So in all honesty, some of the negatives comments should be taken with a grain of salt.

Yes, everybody who complains about angels from TabletSprint are crazy, manufacture fake credit cards and liars.  They use some "Photoshop templates" to produce copies of E-mails from the company and eat babies on breakfast.

That what I was expecting and for that I used "Samatha's" name in quotes.  She reappears under different names.

Everybody who has eyes and brains and is honest, will see who is right.

That seems "really convenient" for Dgaid, at least, that the BBB doesn't make the records public, so Dgaid can basically make-up anything about a complaint with the BBB and post it online and nobody will know if it's true or not.  Also, maybe this guy did post something with the BBB, that doesn't necessarily mean it's true

On another point, in reading this blog, the company rep earlier wrote:

"there often is a several day delay from the time the BBB receives a complaint and the date the BBB will forward a complaint notice to a company or organization --  so in terms of the few cases on record with the BBB for TabletSprint, the case file may not show a response, simply because the customer's issue had been already resolved on our end."

I think that seems fairly reasonable in relation to a few of the complaints noted on the BBB site.

I don't know how valid anything Dgaid  has said, but just pointing out a few earlier points made.

I always wonder - who posts such light-minded comments.  What is your interest in it?

Are you employee/friend/relative?  10-years old angry teen with ADD?

Have you checked other forums on TabletSprint?

This customer service representative Samantha contaminated all Internet with her (not smart) advertisements.

But you would see that their innovative customer service idea is - "Customer is always wrong".

Why would anybody defend her - I have no idea.  Did you have a good experience with them - good for you.  Many people did not and they want to be heard.

LAower2 should instead of attacking and insulting, simply say something more constructive, seriously.

Especially after making one fairly absurd and irrational statement after another.

I just happen to look at the pros and cons of the subject matter of this blog and made note of a few reasonable points.