Our friend Charbax posted on his blog that Rockchip RK3066 CPU is now Google Certified. 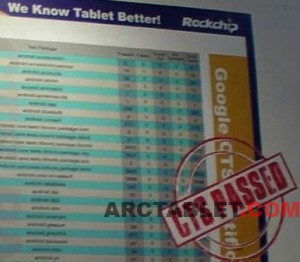 While this has been already pointed ealier at HKTDC fair, it now seems to be more concrete, but we haven't yet found any official statement from Rockchip, we surely will update this article as it happens.

Google Android Compatibility Test Suite certification (CTS) is a collection of thousands of tests that can be performed on any Android device and provide exhaustive testing coverage of the device hardware (graphics, camera, WiFI, touchscreen, accelerometer...) Passing the CTS is a necessary step to be able to use the Android logo on a device and is one of the conditions to access Google Play / Android Market.
The certification of Rockchip RK3066 is good news for future Archos/Arnova devices that may use this platform and should finally be able to offer Google Play.

I have an Arnova 7b G2, do you think Archos will now be able to offer an update so we can get Google Play?

why don`t you use a custom firmware ?

globula_neagra said
why don`t you use a custom firmware ?

It would be difficult to quantify, but even using one of the well-documented work-arounds for getting Market/Google Play on your machine, I doubt whether you get full visibility of all the apps you'd like.

Whenever I check my Google Play account on line, my HTC phones show up as just that, whereas my Arnova tablets show up as 'the phone last used on....'.

I've been knocked back less often when searching for apps for the HTC phones than the 'unknown' tablets.

I take it that this is the reason why there's a 'doctored' version of GetJar that 'lies' about your tablet being a Samsung Galaxy in the hope that it'll give access to a longer list of apps than it would to an unknown device. Pity the Market apps we use don't do something similar.

you must consider that you do not have a tablet that is not google certified, it is normal that on your htc to see more aps than the arnova.
for example on my 7c g2 with a custom firmware i don`t have acces to some apps, but with my rom, i have, it also depends on what the devs are puting in the roms to make apps available.
you can fake your device from the build.prop
you can download apps on your htc and then use them on your tablet.
solutions are plenty, you just need to adapt.

Ps: My tablet appears like this, depending if i am using the 3g or not
O2 FOXDA AN7CG2
FOXDA AN7CG2
No unknown tablet issue.