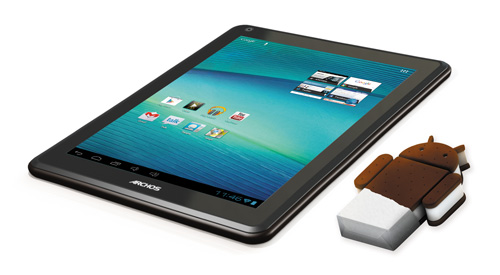 During their annual press conference back in March this year, Archos announced a new line of products that should fill the gap between Arnova, Archos own brand for cheaper tablets and Archos higher end Gen9 and soon to be released Archos G10xs devices. As Henri Crohas, Archos CEO explained, the Archos Elements products will offer Android 4.0, 7″ to 10″ sized tablets, Google certified (thus offering Google Play and apps) priced between 100 and 250 euros.

“We wanted to introduce a new series that not only combines affordability with a new slim design, but features the best that Google has to offer,” says Henri Crohas, ARCHOS Founder and CEO. “With the ELEMENTS series we have done just that. It’s the perfect balance of hardware, software optimization and content through the Google Play ecosystem.”

Today, after recently being discovered in Google Play Store, the Archos 97 Carbon, one of the devices from the Elements series is finally announced. Looking at the recent FCC revealings, more Elements tablets are on the way and should be announced soon.

Looking at the specifications, the Archos 97 Carbon seems…