Latest 4.1.0 firmware for the ARCHOS 101 XS (Gen10) tablet integrates a joystick "Mapping Tool" that was originally designed for the ARCHOS GamePad. This great software let you map the buttons and sticks from a remote controller to specific zones on the tablet screen. This helps to get better joystick compatibility for games that were not initially designed for it. 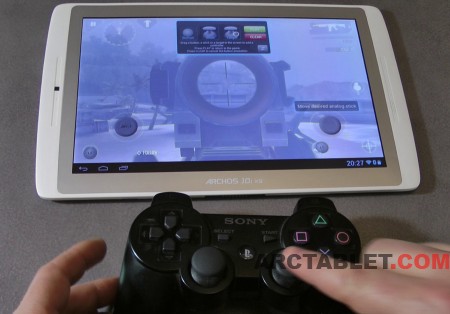 Sony PS3 game controllers (Sixaxis and DualShock 3 are natively supported on the ARCHOS 101 XS with stock firmware, rooting is not necessary. In our test setup shown in this demo, the following hardware is used:

The device pairing needs to be done connecting the game controller to the tablet thru USB. The following are requied: