Arnova 8c G3 is one of the new 8″ tablets from the Arnova G3 line-up. Arnova 8c G3, which is manufactured by Yifang, with slightly different design can also be found in the shops selling as Nextbook Premium 8SE and one beloved Russian company added HDMI-output and OTG and Prestigio Multipad 5080CPRO was born. Many things in this review should also apply to these two models, though design, battery and firmware stuff can be a little bit different. We tried running an 5080CPRO firmware on it and though it worked, we recommend using official firmware from Arnova or custom firmwares developed for Arnova 8c G3. 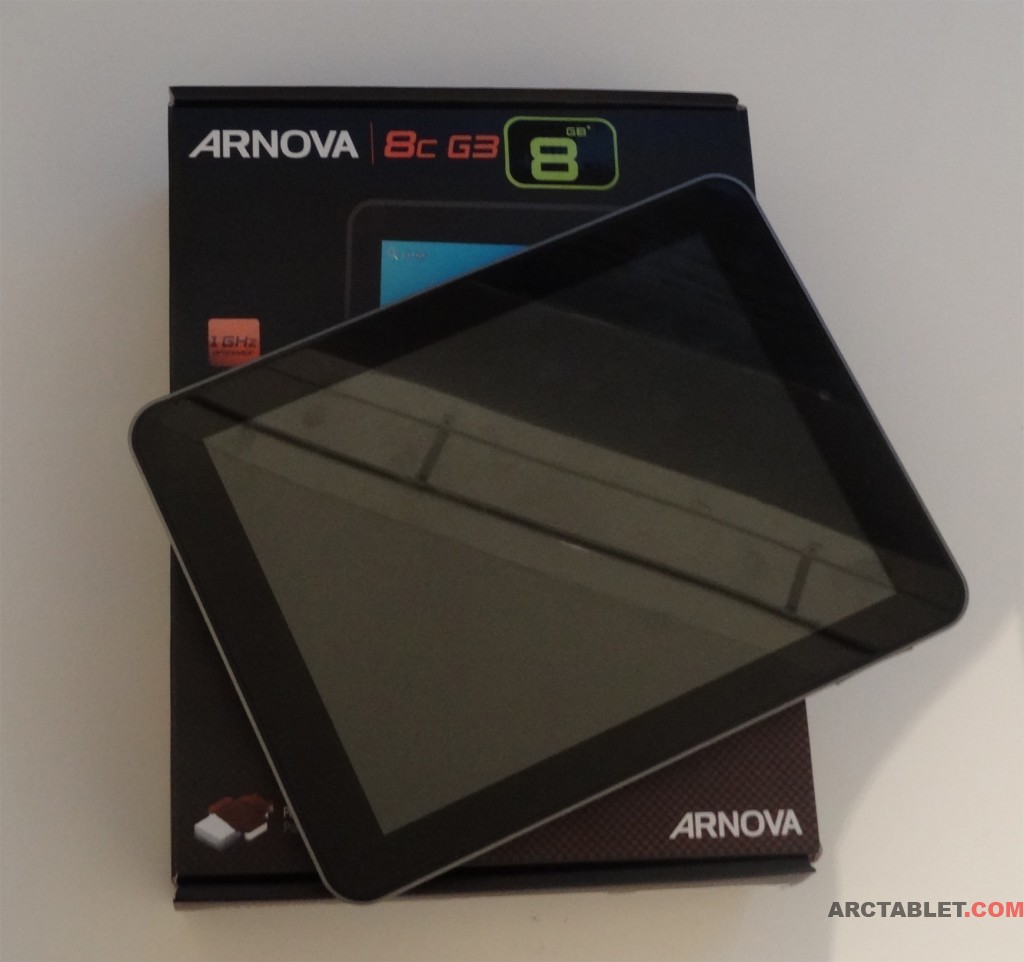 Packaging is quite simillar to other Archos and Arnova products, you will find in the box:

– an Arnova 8c G3 tablet
– an USB cable (micro USB format) for transferring files
– 3 papers that include: Arnova 8c G3 User Guide, 10$/€/£ music credit and  Legal and Safety Notices
– a power charger with one power socket (depends on region, we got an European one), input 100-240V, outputs 5V 2A 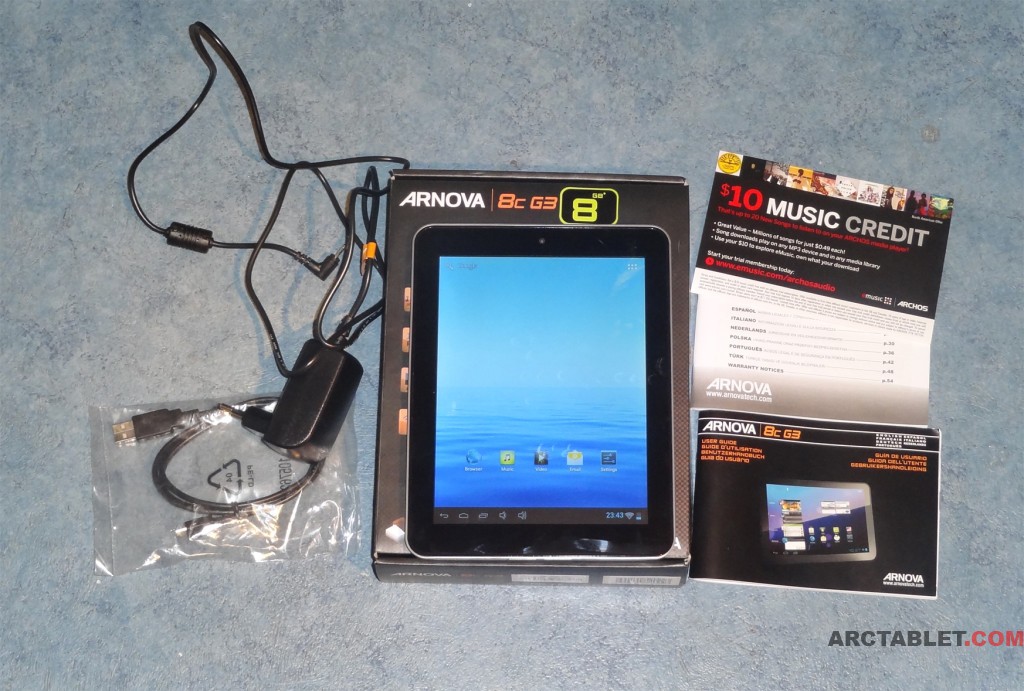 The Arnova 8c G3 looks quite a lot like a smaller-sized iPad. The front glossy surface catches fingerprints very easily(as seen in our video above), but looks really nice. The back is made out of matte plastic which still catches fingerprints quite easily. The greyish frame around the tablet has an aluminium look, but is still plastic. Nothing cracks and we really like the look-and-feel on the 8c G3. 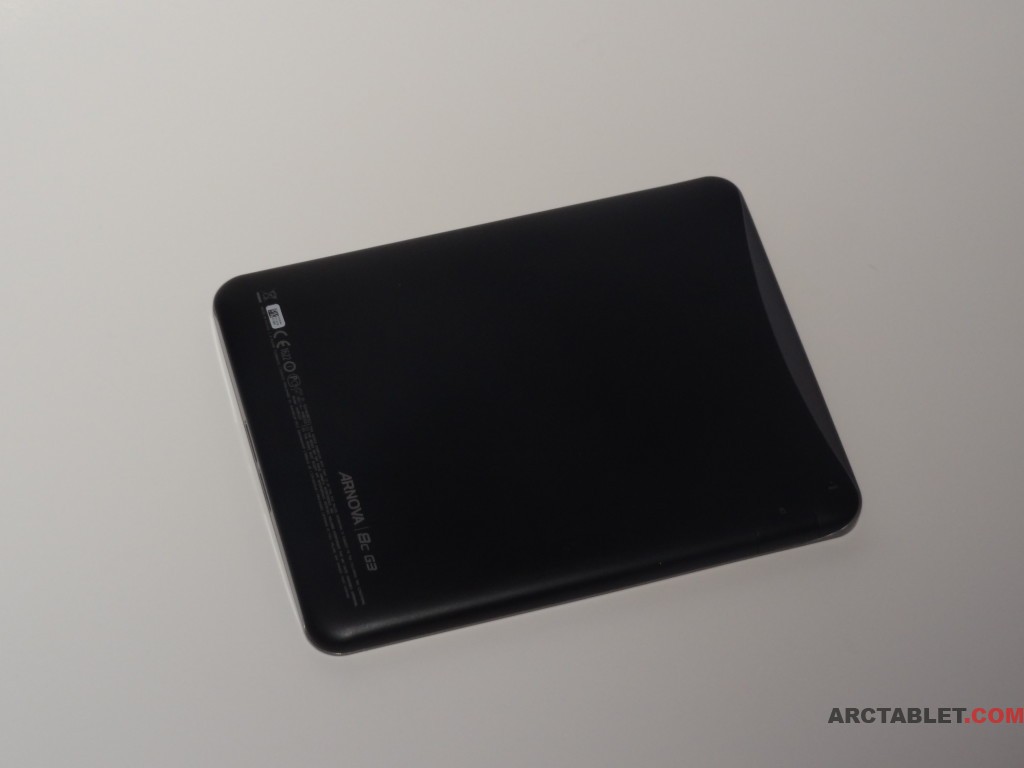 Contrary to many other tablets from Archos, the 8c G3 has a plastic cap covering the microSD-slot. We advise you not to pull the cap too much, because it’s quite hard to get it back in. 😉 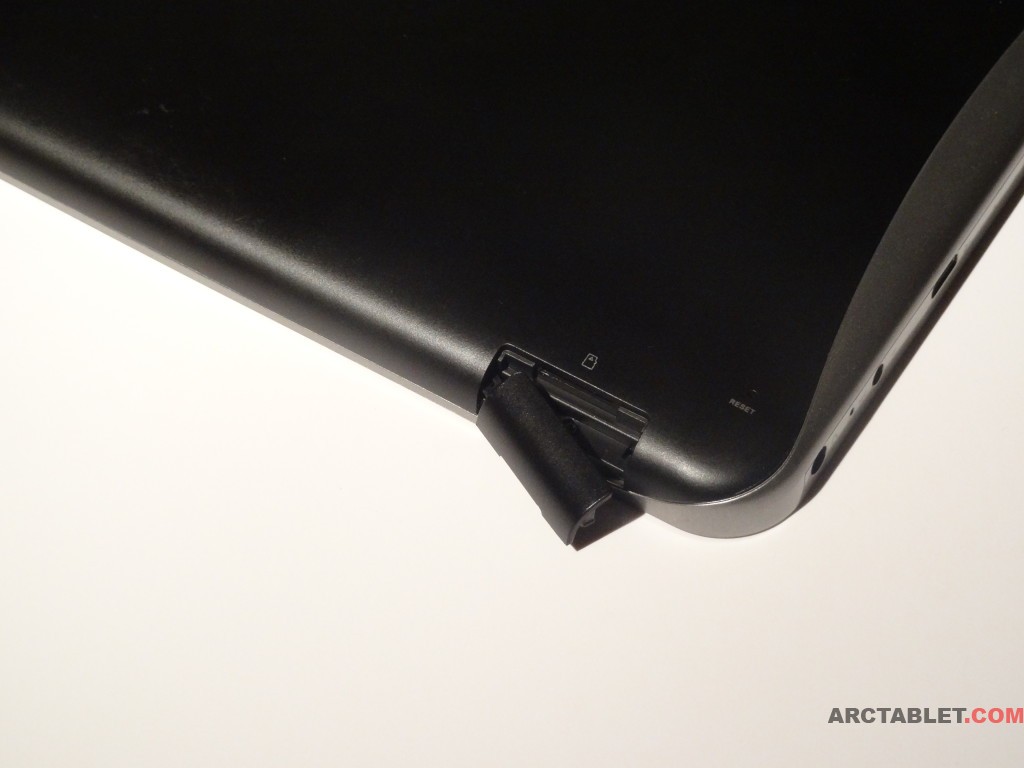 The stereo speakers are located on the right side of the tablet. The sound that comes out is very acceptable, the only problem with the speakers is their placement – when keeping the tablet in landscape mode, you (can possibly) cover the speakers with your hand. 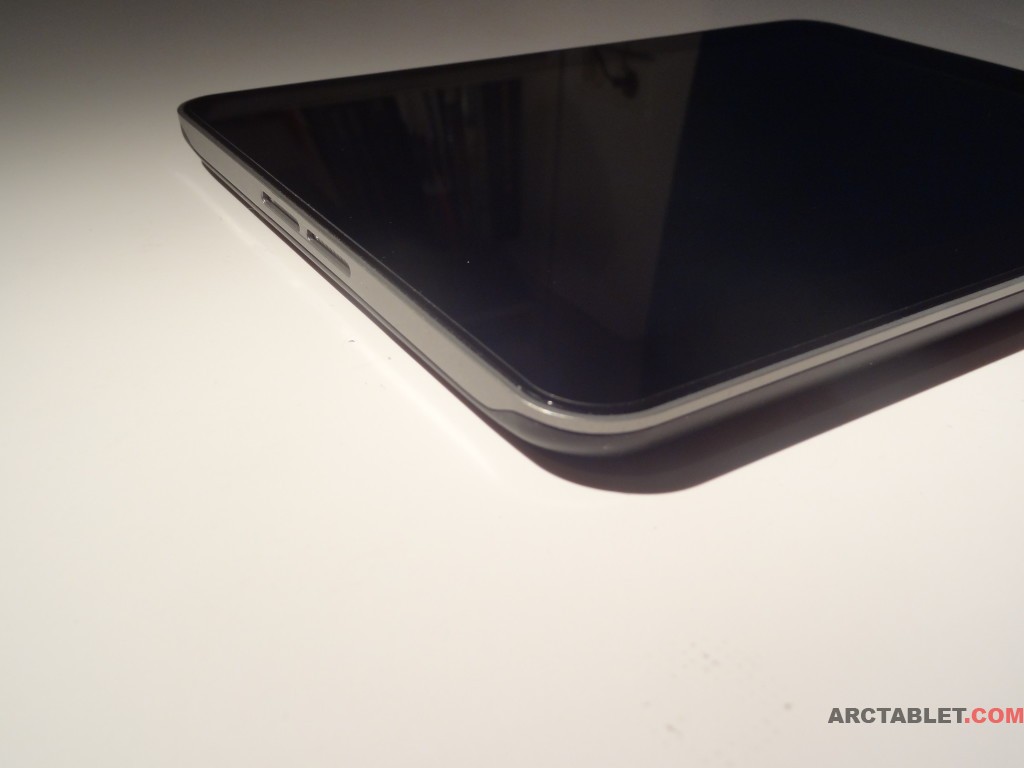 The buttons and connectors are located to the upper side of the tablet(when held in portrait). We can find: volume buttons, power button, micro USB(not OTG / USB Host compatible), power and stereo earphones connectors. The reset pinhole is located on the back. 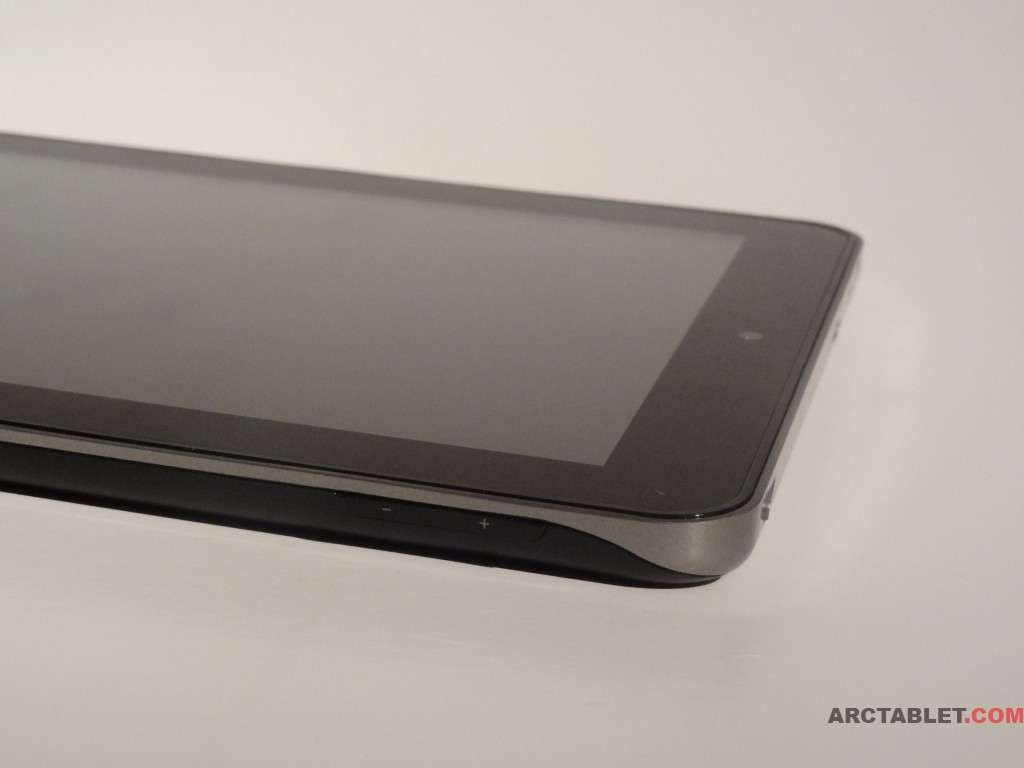 For comparison with 7″ tablets, please refer to part 2 of our ChildPad review.

8c G3 features an 8″ screen with 800×600 resolution. This comes down to 125PPI(pixels per inch), which is just a little bit lower than the pixel density on iPad 1 and 2, which have about 132PPI. Though it can’t match an 1024×768 8″ IPS panel, for TN screen, it is extremely good. Everything seems readable quite well, the viewing angles from right to left are extremely decent in landscape mode. When used in portrait, the colors start inverting quite fast, especially to the left. The brightness can go up quite high and the touchscreen, which supports up to five points, is also very nice for a tablet in this price range. 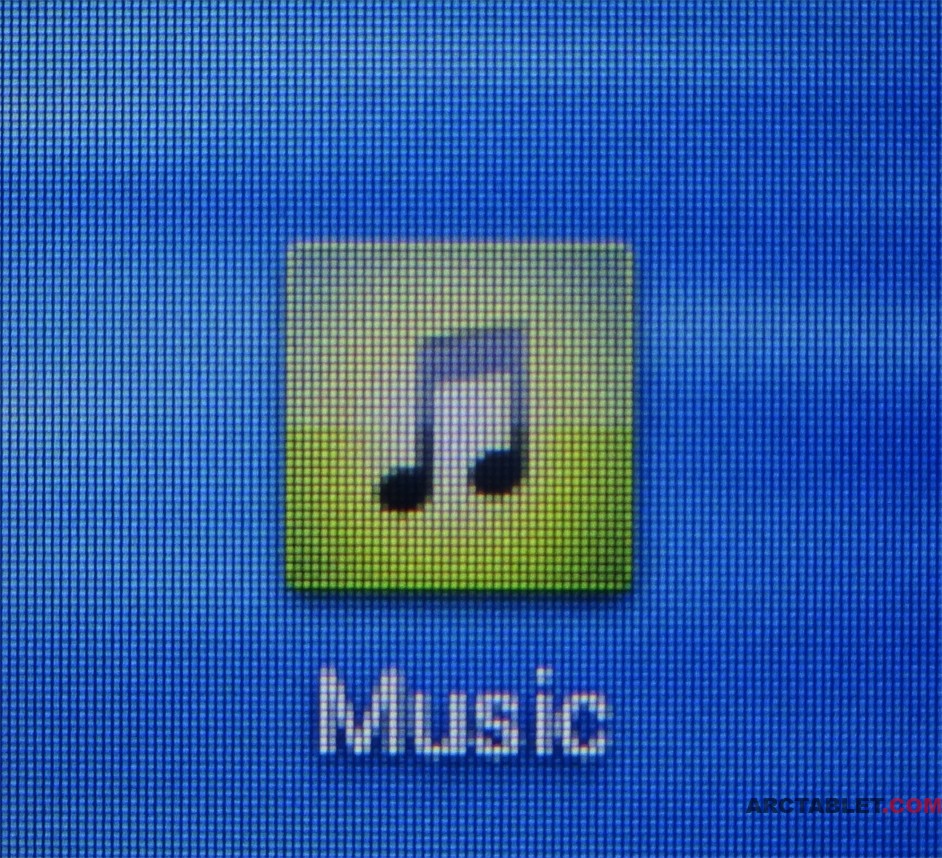 The colors themselves look pretty nice, not oversatured or anything, though black is a little bit greyish(like on many other TN screens). 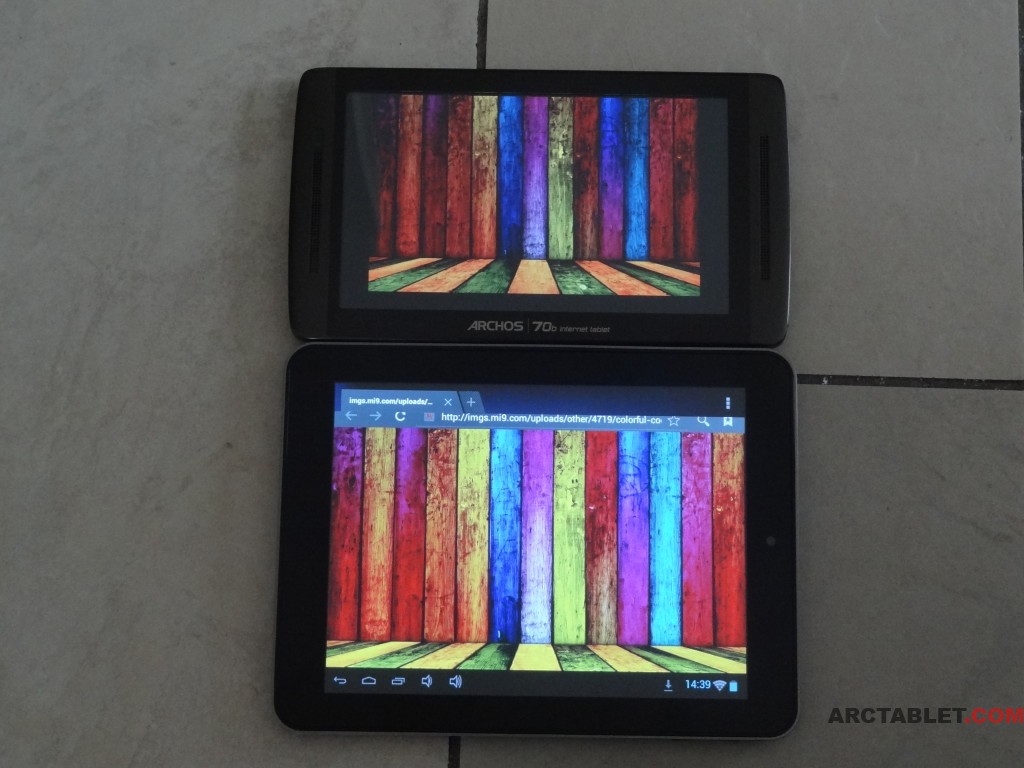 When being exposed to sunlight, the glossy screen of the 8c G3 is quite reflective. Still, thanks to the reasonably high brightness, compared with the Archos 70b IT, it is not too bad. It still acts like  like a mirror when in direct sunlight, but it should be okey in public transport etc. 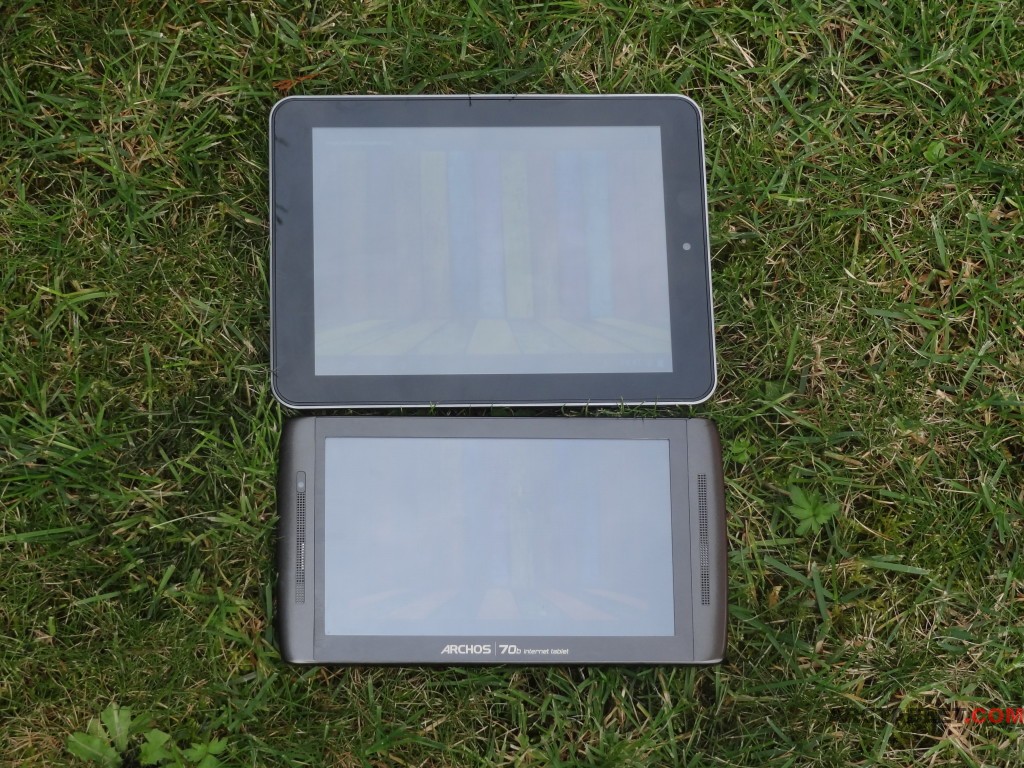 Equipped with a Rockchip RK2918 CPU, the budget Cortex A8 processor which is now over a year old, you can’t expect any wonders. However, with help of Android 4.0 and 1GB of RAM, it works reasonably well. The Allwinner A10 equipped devices may be a little bit faster, still, the RK2918 is not far behind. If you are mainly planning to watch videos(though the screen ration on the 8c G3 is not that suitable for that), or if you are not too demanding user, the 8c G3 should be good enough. Our only concern were some firmware bugs – the flickering backlight on low brightness, screen not always going off after time-out and we believe some settings could have been located a little bit better. From the photo below, you can see that some Android fonts are different which we actually liked, but you can’t change the brightness in the quick settings menu on the status bar and neither you can quickly turn Wi-Fi on or off. 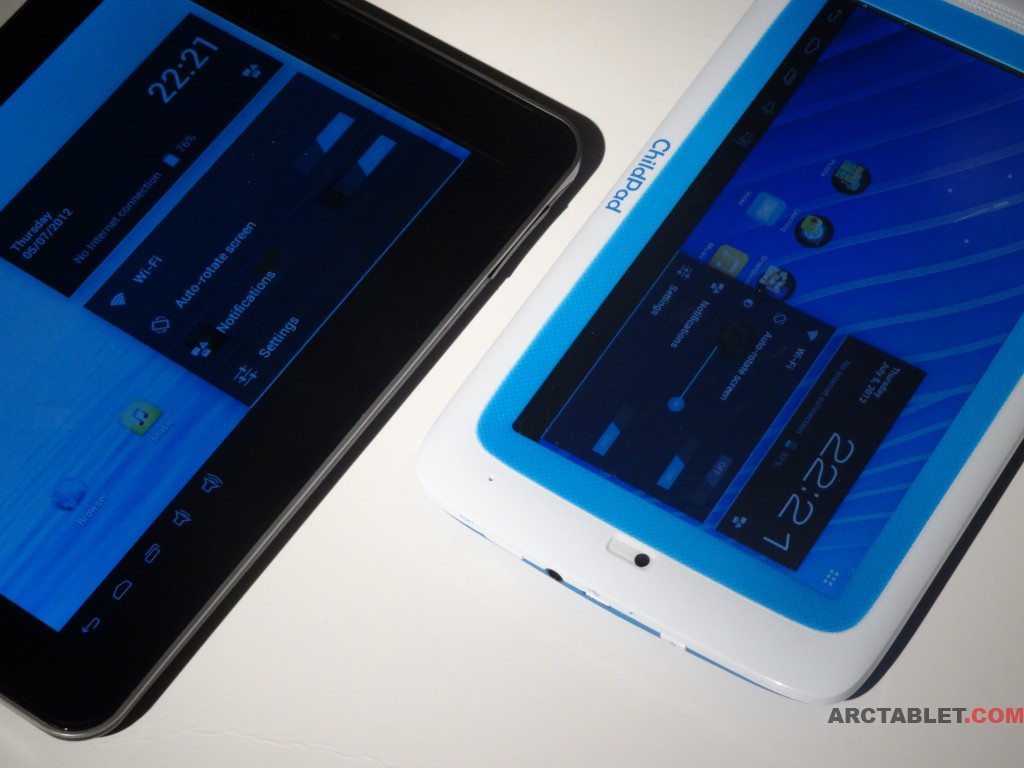 For more information about video and games performance on the RK2918-equipped devices, please refer to our Arnova 10G2 review.

The front facing camera on the 8c G3 is worse than the cameras placed on most other tablets from Archos. 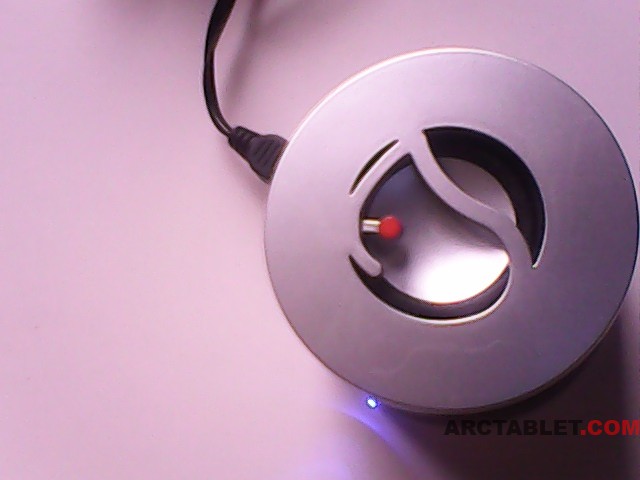 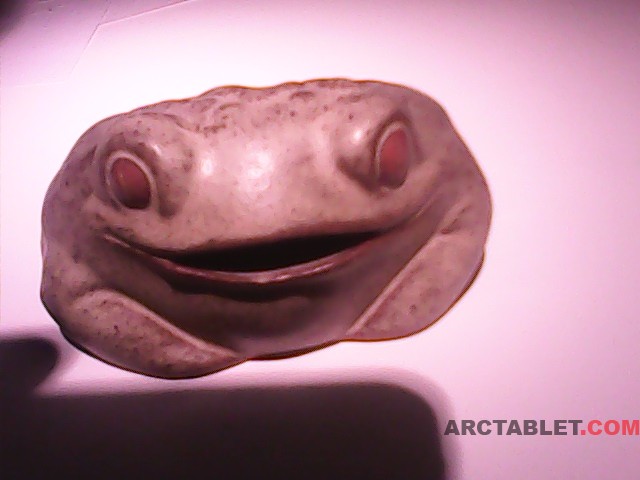 Though it is not that suitable for taking pictures, it should be about usable in video conferencing applications.

We like the 8c G3. Priced slightly under 130EUR, it features a nice design and finish, lies quite comfortably in hands, has solid battery life, performs quite well and offers great features at a great price. Rockchip RK2918 stays quite powerful for a budget tablet and should handle most tasks reasonably well. The 800×600 8″ screen is just good enough and is just enough for browsing, multimedia and gaming(don’t expect the sharpness of an iPad 3 here, though 😉 ). Some firmware glitches are not dealbreakers and well, let’s hope Arnova will eventually address them. The poor camera neither, at least not for us. If you would like to have USB OTG and HDMI-output, you could give Prestigio MultiPad 5080CPRO a look, which is quite simillar to the 8c G3 and is selling for around 20EUR more.