Announced for the end of October 2013, the ARCHOS GamePad 2 (model with 8 Gb storage) started to sell on ARCHOS online store in time. For the 16GB version we had to wait longer and finally, it is now shipping from the Archos online store.

Is it worth the money?

While the GamePad 2 is a great product, the main issue on the ARCHOS GamePad2 is a relatively poor processor performance, mainly on the graphic processor (GPU) side. Sure it can execute most current games, but they won’t run at full frame rate and coming games that require a high performance device will probably give hard time with the GamePad 2.

We have done a quick benchmark comparing the performance between the ARCHOS GamePad2, a Nexus 7 (2013) and a Tegra Note (Tegra 4 processor based) on 3DMark benchmark v1.2.0.1232 – Ice Storm Extreme.


The results show that the Rockchip RK3188 processor has very limited performance compared to the Qualcomm Snapdragon S4 Pro and Tegra 4 tablets. The new tablet models like the Google Nexus 7 (2013) or the Tegra Note with an additional controller are interesting replacements for the ARCHOS portable console. 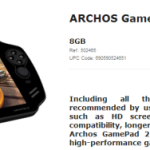 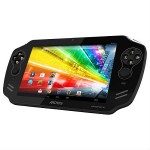