Announced just before CES 2014 trade show, the ARCHOS Helium is the first smartphone featuring support for4G (LTE) networks from Archos. The device is based on the Qualcomm MSM8926 SoC (System On Chip), a mid range 4 cores ARM Cortex-A7 processor with Adreno 305 GPU. There is 1GB of RAM inside, bundled with 4.5 inch screen and Android 4.3. Finally, one week after the 50 Helium, the 45 Helium is now available on Archos online store. There are considerable price variations from one territory to another, it starts at €169.99 in France to €199.99 in Netherlands, Germany and most European countries. The same 45 Helium actually sells at €229.99 in Spain and Italy while the product didn’t make a release to UK yet.

Here is the quick unboxing/demo video from Archos on the 50 Helium, which is simillar to the 45 Helium:

Companies like Wiko, a major player in the smartphone in France (reporting 8.3% market share in France for December 2013 to February 2014) which is quickly expanding to South Europe and other territories, surely have interest in the 4G market as well. Wiko revealed during the Mobile World Congress in Barcelona that they are coming with a 4G Wiko Wax smartphone under €200, which should be available within weeks from now. Let’s have a closer look at both ARCHOS and Wiko offers.

The best specifications of the three smartphones are highlighted.

On paper, the Wiko Wax is a winner over the Helium range: for a similar price, the Wax is offering a much faster processor and a more robust protection for the screen. On the other hand, the Helium phones come with the Archos multimedia apps(which are now ported anyways) and 50 Helium comes with 8GB of internal storage and features a larger screen. Knowing that the Wiko Wax should be available later this month (as Wiko just confirmed on Twitter, in French) , it may be worth the wait to wisely compare both devices before make your choice. 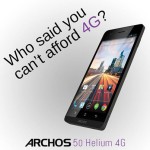