It is getting crowded here.

Sometimes, Archos reminds me of HTC. They have too much models which have nearly the same looks and have the same hardware inside. For example – original Desire and Desire S; Wildfire, Wilfdire S and Explorer. Archos started doing the same with their budget devices. Just look at the 7″ models priced between 99 and 199EUR. I made a picture which shows how crowded it is.

That one is for 7″ tablets only. So, if you are an Archos fanboy, are looking for a 7″ tablet and want to spend between 99EUR and 199EUR, you have six choices! And what is the difference between them? Arnvoa 7e G2 adds two buttons to the Arnova 7b model. If you add 10EUR more to 7b DT you can buy Arnova 7b with capacitive touchscreen. For 10EUR more there is an Arnova 7 G2 which has the old design and adds a kickstand. The 7c G2 is quite a different product which offers 3G, but has a slower processor. Finally, there is also an Archos 70b Internet Tablet, now selling for 180EUR. While most Archos fanboys can understand the differences between the Archos products, most customers can’t. Then, there are also another downsides. When the new models come out every month and the old ones become outfashioned that fast, customers can get really pissed(I will give more attention to it in this article). The updates for such amount of models can’t be released fast enough. Archos doesn’t spend much time on Arnova firmwares anyways, but if there would have been twice as little models, there could be a few firmware upgrades for all of them. And it does make sense! Customers think they are not yet forgotten. Remeber the happiness of Gen8 owners when the 2.4.82 was released? And the Gen7 owners back in April? Yes, there are a users who are still complaining about the lack of Gingerbread, but most people are just happy they received an update. You just roll out a small update and people shut their mouths for another two months.

However, I don’t get the pricing. Arnova 7e G2 is available as low as 85EUR in the Netherlands, while Arnova 7b G2 is 14 EUR more expensive. Looks like things which happened last year are happening now too. The 70b eReader offered nearly as much as Archos 7 HT V2 and sometimes even more, but was priced much lower. Customers are put off by the fact it is just called an eReader. Archos finally understood that and, eventually, left the word eReader out of the name. Still, I think that 70b eReader was a success. Archos lists 7e as a tablet designed for reading, hopefully customers will not be put off that much as with the 70b eReader. Let’s hope that Archos will also put a Pixel Qi screen in such eReader one day.

Yes, Archos is a big company. At least, according to their 2011 turnover. You can find the French release here. They claim to be the number one in the price segment with tablets under 400EUR. They say to have 24% market share in that market… However, let’s count how much tablets they actually did sell. Vision market share was 25% in 2010, let’s say it’s ~10% now(because they salled much more tablets, than last year). So, 150 million came from tablet sales(I think Archos counts 28IT as a tablet too). Let’s say they get 125EUR per tablet. That sounds not much, but don’t forget the picture above. Arnova 7e G2 is selling for 80EUR incl. taxes. 85/1.19-10=61EUR, that amount Archos gets from the suppliers. For 199EUR selling Archos 80G9 it would be: 199/1.19-15=152EUR. I don’t work in retail, so I have no ideas what margins they have there, but I know that most shops make money on accessoires. 150M / 125 = 1.200.000 tablets sold. I have no idea about other brands, but I can imagine that Amazon sold more of its Kindle Fires.

Now I have something interesting for you: 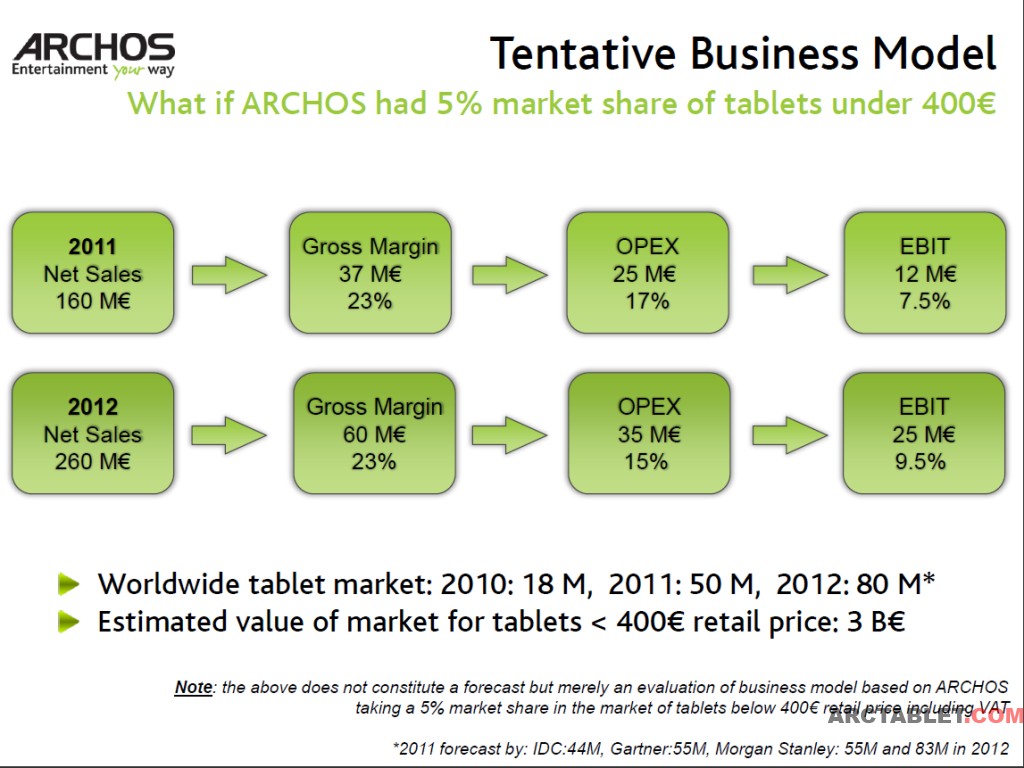 Didn’t they reach 24% with tablet sales of 150M? There are various options: they don’t count Kindle Fire and Nook sales(they are eReaders!), they can’t count or the forecasts didn’t came out. According to some sources, there are 60M tablets sold in 2011. No word on the market under 400EUR, though.

Another picture from that pdf: 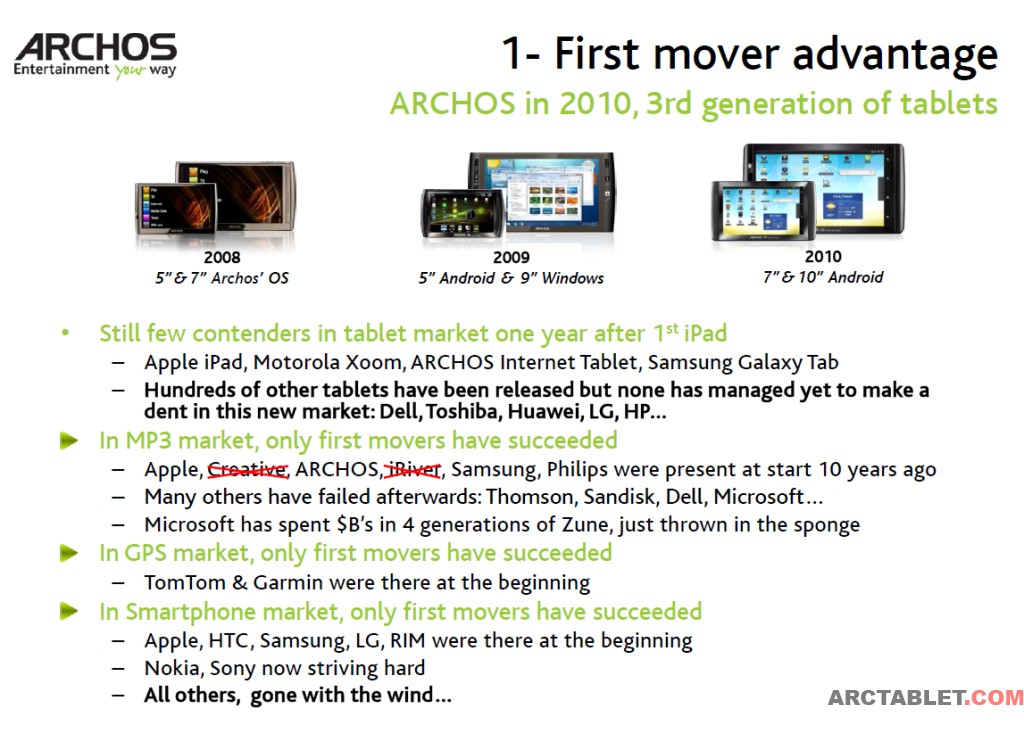 The smartphone market sounds the most funny. Huawei and ZTE(chinese brands, but Archos is not 100% French also) are now doing extremely well. I will not comment on LG and RIM, you know why and Sony seems not to be doing that bad. In the MP3 market, Philips is nearly gone, Sandisk is doing well selling its Clip+ and there is no word about Cowon. Same for tablets – Amazon, Nook and Huawei were not the first with them. According to Archos, you need to be the first mover to succeed, now tell me, dear Archos, why did you start making laptops? 😉 We know why. Because, they were looking for money. Fortunately, they succeeded with Android tablets, but their laptops failed.

Nicest websites in the world.

I think if there would be a contest for the ugliest website in the world, Archos US would win it. Just look at that: 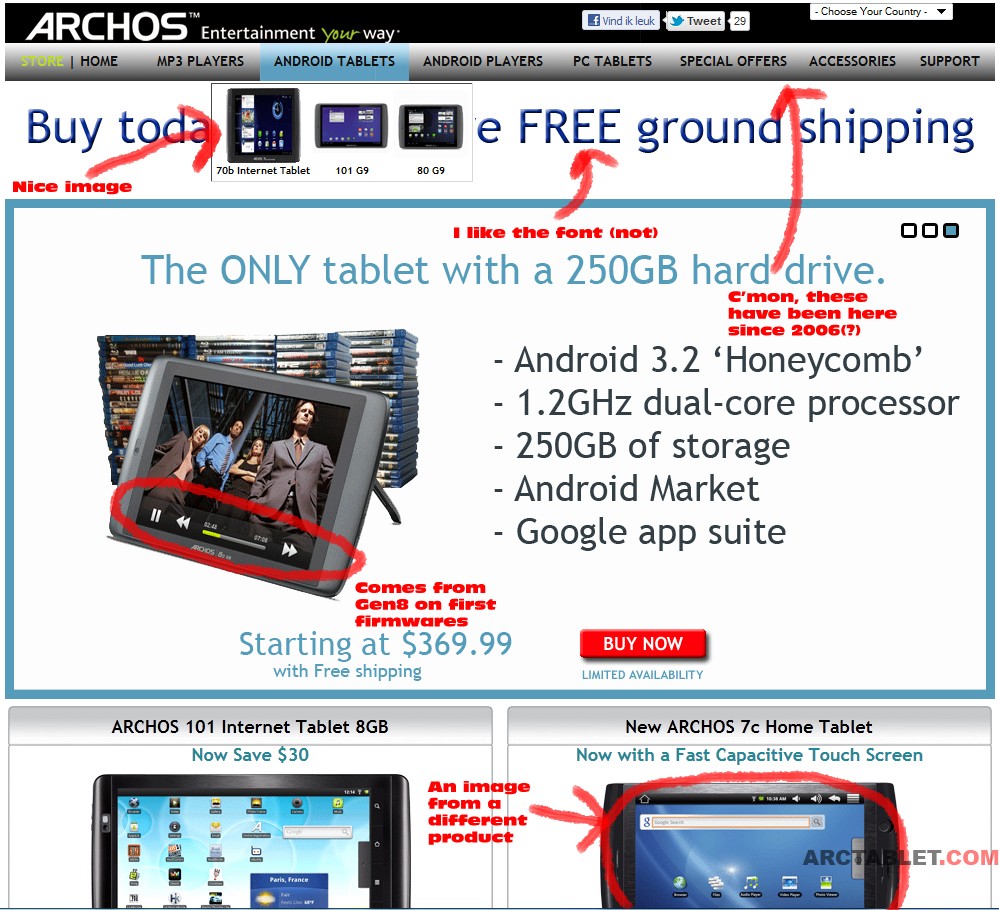 I mentioned websites. Their international website is better, it got a new look two(?) years ago. It just got a new country selection page, too. However, I think it becomes a little bit too green now. Sure, green is a nice color, but I think it is not good for your eyes(especially, when you are looking 24/7 waiting for the ICS firmware to appear). Also, some buttons(like the “buy” button in Archos store), just stay there for ages. It just doesn’t look nice and hopefully, Archos will change it one day.

Sometimes, I hate Archos. When it comes to releasing new models, I just don’t get them. Why are there two versions of Archos 70b IT released? Why can’t they both be upgraded to Honeycomb and ICS? Archos is doing this more and more. A new example from them, the Arnova 8b G2: 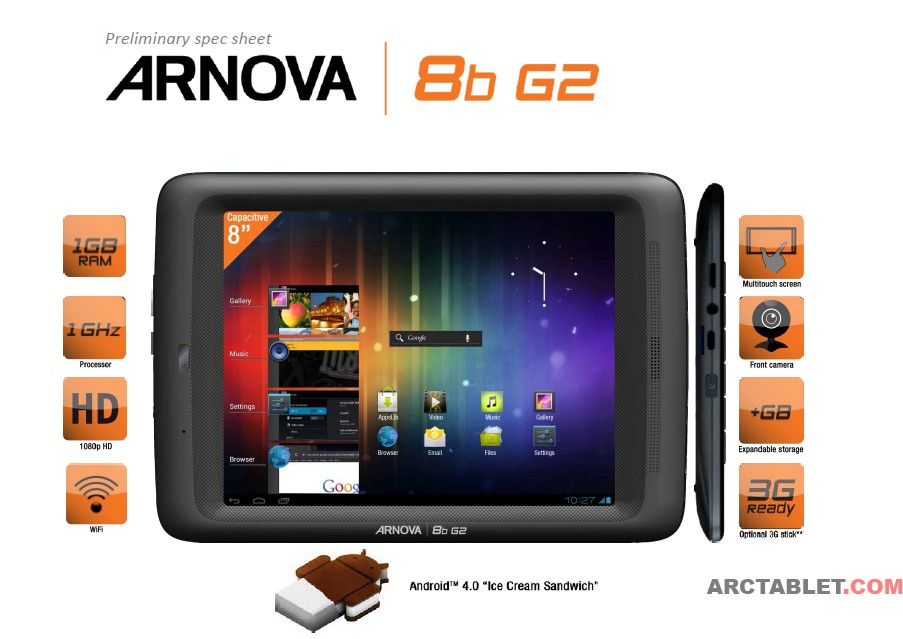 The upper image comes from the pdf document which was first found on the Arnova website and dicovered by our friends at jbmm.fr. Archos saw that and replaced the pdf by another one. Fortunately, cajl saved it and the original can now be found here. What we now see on the Arnova website, is the Android 2.3 version: 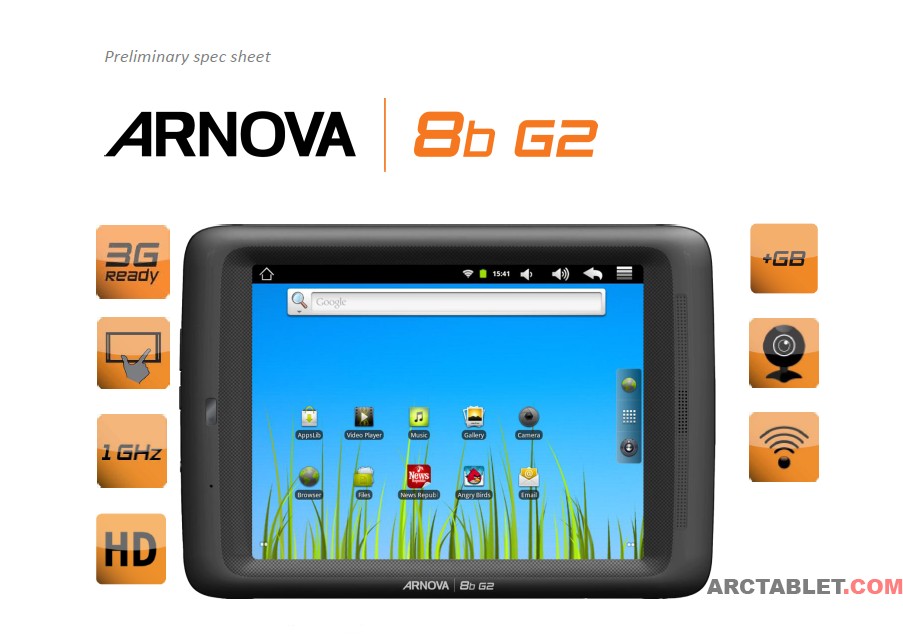 So, we have two models. One has ICS, another doesn’t. The other will probably have 512MB of RAM. They are(probably) released within the timeframe of two months. Probably Archos didn’t want to release anything with ICS and 1GB of RAM, before Gen9 got it… Still, this is not the way how a good company should release their products and treat their customers. BTW, did you see the unused mini-HDMI port? May be Archos wants to implement it in G3 models and just use the same casing for them?

Archos should be lucky, really. Why? Because they have a huge community supporting their brand. Sometimes there are people who also make some nice videos. One of them was a valentine video, I know that Valentine has been here a few weeks ago, but I find the video really nice/funny, so I decided to share it with you:

Soon we will have a press conference about 2011 year results and 2012 strategy plans, so there will probably be plenty of stuff to write about. Hopefully, the ICS firmware for the Gen9 won’t take long and once that is released, Archos will hopefully release the 101b internet tablet. For now, don’t forget to leave a comment on our forum and have a nice week! 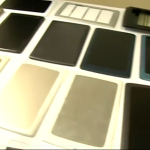 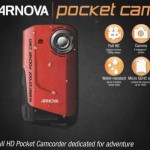