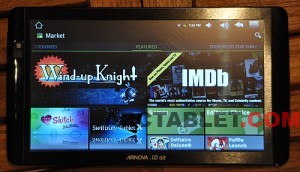 Our custom Arnova 10 G2 firmware has been updated and now offers the following nice new features:


Thanks to Steve (Ttz642t) for his work on our WIKI, Fenice57 and Finless which firmwares really contributed to the make of our custom firmware.
2012/02/10 edit: (Credits) we wanted to clarify that this firmware is largely based on finless Bob’s firmware modifications, with additions by fenice57 and arctablet.com

We choose to keep this custom firmware as default as possible, no fancy boot logo, no extra applications. Once you have installed Android Market, you will be able to customize the tablet as much as you want. We will also provide a free “Kitchen” service so you should soon be able tocook and customize your tablet boot logo, applications and settings by yourself.

This firmware is specific to the Arnova 10 G2 and should not be installed on other devices.

After the custom firmware has been installed, please follow ArcTools tutorial to install Android Market.
After installation, the Market should show most of the applications, if you are liissing some applications in the Market, please use the Market fix procedure.

This firmware currently needs a special procedure to be flashed. It currently requires to be done under Windows Operating system, using RKAndroid Tool v1.29 (RK29update.exe Windows application). We’ll try to provide instructions for other OSes in the future.
Flashing Instructions to be completed later
For reference, you can check the Rockchip Flashing Tool page and our Arnova 7G2 Flashing video below.


If you don’t want to flash this custom firmware and still want to install Android Market, you can try the following method from our forum.

In case you don’t like this firmware or if you just want to go back to the default stock firmware:

Version 1. Initial release
Version 1.1 & 1.2 were released together with Finless, they are not supported anymore
Version 2: Full update with new features
Please note that release number has jumped to version 2, to make sure there is no confusion with Finless firmware.

We have more features planned for this custom firmware such as adding support for more 3G dongles, Bluetooth and GPS, CIFS and OpenVPN. We are also considering to replace the ext4 filesystem to one that is better suited to NAND Flash memories, such as YAFFS. We are also working on supporting more Arnova G2 devices, such as the Arnova 7b G2, Arnova 8 G2, Arnova 9 G2 or Arnova 10b G2.
Arnova 7 G2 users should check fenice57 firmware which provide a lot of great features. 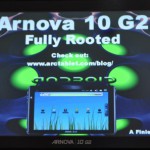 Getting your feedback about Archos, Arnova and Android tablets
Arnova 8 custom Android 2.2 Froyo firmware with Android Market and root – kasty-arn8-22