We are offering an archive of custom firmwares for your Archos 7 Home Tablet version 1.

These firmwares let you upgrade your device to latest Android operating systems, such as Android 2.1 (Eclair), Android 2.2 (Froyo) or Android 2.3 (Gingerbread). They also let you have superuser “root” access to the device and install Android Market.

These custom roms are made by independant developpers and are not supported by Archos. They are experimental work, please upgrade only if you know what you are doing.

You will find here few firmwares for Archos 7 HomeTablet version 1 (7HTv1), if you are not sure on which version you have, please check our Archos 7HT v1/v2 page.

If you have an Archos 7HTv2 please visit our dedicated firmware page.

You can find Archos default firmware and other custom firmwares for your Archos 7 HTv1 in our Archive: 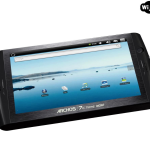